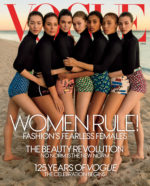 What's this? This is an unbiased just-the-facts news timeline ('newsline') about Adwoa Aboah, created by Newslines' contributors. Help us grow it by finding and summarising news. Learn more