I was really excited, because I haven’t seen anyone in awhile. We showed up at the same time and we both had black and red on, it looked like planned it out.” So, will these two be working together again? Nothing in the works, but maybe one day. I mean, something different, because we both know each other, we are comfortable, so that’s always nice. 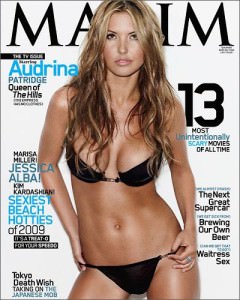 Patridge appears on the cover of the October 2009 issue of Maxim magazine. She talks about acting in Sorority Row, the last season of The Hills, and the craziest pick-up line she’s ever gotten.

I play a sorority girl who gets cheated on. And if you cheat on one Theta Pi, you cheat on all Theta Pis, so me and the other sisters decide to pull a prank on my boyfriend—which does not go according to plan. It’s very gory, but it also has a lot of comedy, so when you’re not getting scared and jumping, you’re laughing.