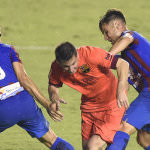 Barcelona win with goals from Neymar Santos in the 34th minute, Ivan Rakitic in the 44th, Sandro Ramires in the 57th, Pedro Rodriguez in the 64th, and Lionel Messi sealing the win with a 77th minute goal. Neymar twists his ankle and is substituted. Enrique:

Neymar twisted his ankle and suffered a sprain and we substituted him as a precaution, He asked for the change and later wanted to try and continue playing but we had already made the decision. 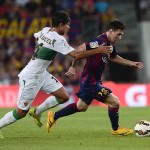 Lionel Messi scores twice as 10 man Barcelona beat Elche. His first goal comes in the 42nd and Debutant El Haddadi Munir doubles for the side in the 46th minute, seconds later Javier Machelano is sent off for fouling Garry Rodriguez but this doesnt stop Barcelona from pushing harder as Messi gets in their third in the 63rd minute.

Luis Enrique: "I've always said Messi is the best player in the world. In everything – scoring, assisting, defending, putting pressure…"