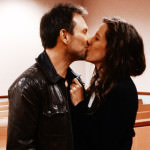 Slater marries Lopez in front of a judge at a local Miami area courthouse. A spokesperson says that the couple spontaneously decided to get married after they initially went to the Coral Gables District Court near Miami to get their marriage licence. Slater:

We had a big engagement party on the 31st of December and it was nice, it was like New Year’s and we had all the family come, 200 people, so it kind of already feels like we did the wedding, so we are just going to do a nice backyard situation.