Rauner’s team announces that there will be no inaugural ball as part of the inaugural celebratory activities. Instead, there will be a concert by an as yet unnamed “famous musical act.” The tickets for the concert are $125 each. Other activities include free ticketed admission to the swearing-in ceremony at the Prairie Capital Convention Center, free admission to the Abraham Lincoln Presidential Museum in Springfield, a “Celebrate Illinois” event at the Lincoln library and an open house with the governor and first lady at the Old State Capitol. An inauguration dinner and reception will also be held Sunday, Jan. 11, with tickets going for $1,000 apiece.

The imminent legal issue on this matter is settled — there are two appointments to fill the comptroller vacancy. The constitution requires that Bruce appoint a comptroller to a four-year term and that is how we plan to proceed.

Jason and Kathy will both bring invaluable experience and expertise to the governor’s office. Jason has a top flight legal and strategic mind and brings a deep understanding of how one (of) the country’s most successful governor’s offices operated. Kathy already has relationships with our Congressional delegation and knows how to navigate the federal government as well as anyone in Illinois. Most importantly, both are committed to transforming Illinois and making it the most compassionate and competitive state in the nation.

A spokesman for Rauner objects to the early termination of the state’s contract with Northstar Lottery Group. The termination agreement calls for two Northstar subcontractors, Gtech and Scientific Games, to run lottery operations for a reduced amount of money until a new vendor is selected. Rauner spokesman Mike Schrimpf :

Despite our repeated requests, the Quinn administration has executed another 11th-hour deal. We were not consulted or even informed. This looks like a bad deal that creates a new binding contract that will cost taxpayers tens of millions of dollars.

I’d be happy to walk through the termination deal with anybody from the Rauner camp as early as tomorrow.

Rauner faces questions about conflicts of interest over his wife Diana Rauner’s decision to continue as president of Ounce of Prevention, a nonprofit that gets millions of dollars in state funding. Ethics experts question if the organization will be favored by lobbyists or be granted special favor in receiving funding. Patricia Werhane, Wicklander chair of business ethics at DePaul University:

It’s going to appear that it’s doing well because she’s pulling strings. She should give up that position.

Rauner urges Mayor Rahm Emanuel to hold off on raising the minimum in Chicago. The Chicago City Council goes ahead with the plan and votes to raise the minimum wage within city limits from $8.25 an hour to $13 an hour by 2019.

My recommendation to the mayor is he keeps in mind competitiveness for the city of Chicago. We do not want to increase unemployment in the city of Chicago and end up hurting many of the very families that we all want to help. I would encourage Mayor Emanuel to think about the minimum wage strategically in the same context that I’ve recommended for years, and that is: Let’s do it in the context of pro-growth reforms.

Rauner says he intends to use some of his own money to make needed improvements to the executive mansion in Springfield. State officials this summer said they were deferring significant repairs, the scope of which are unclear.

I will, personally, Diana and I, will donate to improve the governor’s residence. We will also raise private funds to improve the building itself. We should treat that residence with respect.

Rauner states that pension benefits to retired state employees will not be affected despite campaign trail talk that he would slash benefits to retirees and current workers and lead a transition into a corporate-esque 401(k) arrangement.

Don’t modify or reduce anybody’s pension who has retired, or has paid into a system and they’ve accrued benefits. Those don’t need to change. 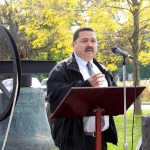 lects West Chicago Mayor Ruben Pineda to serve as the co-chairman of the Intergovernmental Efficiencies and Local Government transition committee.

It is essential for us to have the best and brightest and most informed group of talent from around the state providing input on how to make Illinois compassionate and competitive.

Rauner beats incumbent Pat Quinn by a margin of four percent to be the next governor of Illinois.