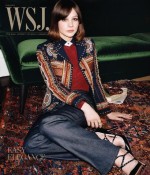 Mulligan appears on the cover of the May 2015 issue of WSJ magazine. She talks about about early career struggles and regrets she has about roles she has accepted and rejected.

My parents were really protective and didn’t think this was a particularly solid career​. ​They didn’t exactly forbid me, but they wanted me to go to university. I had other plans.​..​We have this running joke in my family about how they were right​. ​They say, ‘See, we told you that you were never going to make it.’​ ​They have all proverbially eaten their hats. Mulligan appears on the cover of May 2015 issue of Vogue. She talks about her preference to keep her personal life as private as possible.

I have always felt that the less people know about me, the better. The more similar you look job to job, the more they relate to you from your previous roles That’s why I’ve done loads of really stupid things to my hair in the past to try to not look the same. 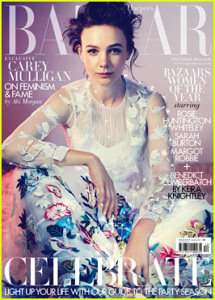 Mulligan appears on the cover of the December 2014 issue of Harper’s Bazaar magazine. She talks about acting, being comfortable in her own skin, and other actresses she admires.

I constantly watch people like Marion Cotillard or Cate Blanchett or Kate Winslet. I have a fear of being passive and what I admire about all those actresses is that every choice they make is really strong. Even if they’re playing something very quiet, it’s visceral and bold.

Mulligan plays Daisy Buchanan in the adaptation of F. Scott Fitzgerald’s Great Gatsby. Daisy is the “old love” romantic interest of nouveau riche Jay Gatsby and subject to his various lavish, yet dangerous attempts to win her over once again, as documented by her cousin Nick Carraway.

The Kardashians are sort of a reference in that Daisy’s purpose in life is—she feels her purpose is to look very beautiful all the time and to constantly be on show.So what I was trying to imply was that there’s an essence of part of the amazing business they run as the Kardashians is looking beautiful a lot and looking very present, presentational and perfect.

LaBeouf and Mulligan break up over their “incompatible lifestyles.”  LaBeouf says there was friction in the relationship because Mulligan was more interested in marriage and children while he was not ready to settle down.

Carey is not just an actress, she is a great human being, a sweet girl and super intelligent.  Our thing came down to not having compatible work/lifestyles.  We were always traveling, and had sensibility differences that weren’t conductive to living with one another.

I come from divorce.  I’m only doing marriage once. It’s not a game for me.  I’m not a religious person, but I have ethics.

Mulligan is nominated for Best Actress at the 82nd Academy Awards for portraying Jenny Mellor in An Education.

The people I’m nominated against, it’s unbelievable. I keep tearing up. It’s honestly the most unbelievable feeling. It’s the biggest honor. I’m trying not to swear. 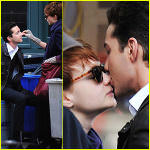 LaBeouf is reportedly dating British actress, Carey Mulligan.  The two met while filming Wall Street 2 and were spotted kissing and cuddling at a cafe in Greenwich Village.

What's this? This is an unbiased just-the-facts news timeline ('newsline') about Carey Mulligan, created by Newslines contributors. Make it grow it by finding and summarising news. Learn more