Santana and Branch wins the Grammy for Best Pop Collaboration With Vocals for The Game Of Love.

Everlast and Santana wins the Grammy for Best Rock Performance By A Duo Or Group With Vocal for Put Your Lights On.

Clapton and Santana wins the Grammy for Best Rock Instrumental Performance for The Calling. 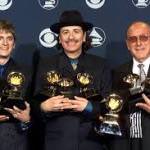 Thomas and Santana wins the Grammy for Record Of The Year,Best Pop Collaboration With Vocals and Song Of the Year for Smooth. Santana wins the Grammy for Album of the Year and Best Rock Album for Supernatural, and Best Pop Performance By A Duo Or Group With Vocal for Maria Maria,  and Best Pop Instrumental Performance for El Farol.

To live is to dream. To die is to awaken. Please don’t wake me up. Santana wins eight Grammys for his 1999 album Supernatural, including one for best album and two for the single Smooth featuring Rob Thomas. It is the most Grammys won by a single performer in Grammy history, tying the record set by Michael Jackson in 1983.