Pope talks to her fans via Periscope:

I still talk to Blake. He’s a huge part of why I’m here. So, It would be fell weird not keeping him in my life as a friend, and he’s just always been a huge support system for me.

In an interview with Fox News, Pope says the tide is turning for country women music.

I do see things changing for women and country radio. This year was a big year for women and conversation that was started, initially seemed to have this negative kind of subject matter but, in the end, I think it was best thing that could have happened for us. The conversation opened up…I’m really proud to call myself a woman in country music, because I mean, we’re doing such great things and we’re paving the way for each other. So It’s exciting to be a part of movement.

In an interview with Taste of Country Pope talks about her getting fired up for her performances.

I just channel all the obstacles thrown my way, like my parents’ divorce when I was 11. I had to get through that. I felt helpless through that, but I came out the other side learning a lot from it…I grew up singing country and I feel like I’m a good girl, but I’ve got tattoos and I travel and I’m on the road a ton. As a kid I got good grades, but I also had a fake I.D. There’s all these contradictions with myself, and I’m sure a lot of people. 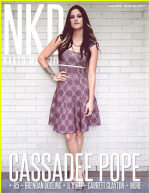 Pope appears on the cover of the November 2013 issue of NKD magazine. She talks about her boyfriend, going country, and 11.

’11′ isn’t about bashing anybody or making my parents feel bad about what they did. I just wanted to go back to that place of feeling helpless. At the time, my world was crashing around me and I wanted people to be able to related to that.