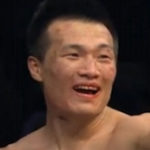 Nearing the end of two years of mandatory national service, Chan (“The Korean Zombie”) talks about his upcoming return to the Octagon.

Conor McGregor has made a mess of the featherweight division. I don’t think he’ll be coming back to featherweight, though. A lot has happened in my time away. We’ll have to see what happens. We have to see if McGregor is going to defend the belt or not. I doubt it, though…I haven’t really thought about [my path to the title], I need to get a comeback fight under my belt first. Right now, that’s my focus. Of course, I want to be back in the title picture as soon as possible, but first thing’s first…McGregor is very good at what he does. Only he can get away with that kind of stuff. It’s too bad we’re not in the same division. Since I don’t think he’s coming back down to featherweight, we probably won’t get the chance to fight. But, obviously, he’s become a big star and is making lots of money. I honestly don’t know if it’s good for the sport, since he’s just looking after himself.