Rampling as the face of their latest campaign, which will consist of portrait-style images shot in black and white by founder and creative director Francois Nars.

She is a natural beauty that feels strong, yet relatable. I remember Dirk Bogarde referencing Charlotte’s ‘fabled look’ because of the combination of her beauty and withering gaze. This is what makes her an endlessly watchable mystery.

Rampling is nominated for Outstanding Supporting Actress in a Miniseries or Movie at the 65th Primetime Emmy Awards for portraying Eva Delectorskaya (Older) on Restless. 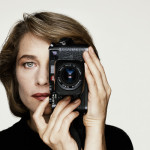 Rampling gives an interview to The Talks. She discusses what it takes to be an actor, her early career, and giving her kids advice.

No, because I never wanted advice at that age. I couldn’t be bothered with anybody telling me about anything so I don’t do that with my kids. I actually don’t advise them on anything. If they want to chat about something, that’s different. But I’ll never put my opinion forward to them, because I think that’s handicapping people. I really do. Because it’s not going to change anything, they’re going to resent it anyway. You usually want to go against whatever you’re told. At least my 18-year-old self would have done that. I always wanted to go against what I had been told.