NASA releases detailed photos and a flyover animation of Charon, taken by New Horizons when it made its close flyby of Pluto on July 14. Scientists say they expected to find a long-dead world pocked with craters, but instead the surface plays host to mountains, a red north pole and a host of other geological features including a canyon more than 1,000 miles wide that stretches across the moon’s Pluto-facing side, and perhaps along the far-side of the world. That canyon is probably four times longer than the Grand Canyon is on Earth, and twice as deep in some places.

We thought the probability of seeing such interesting features on this satellite of a world at the far edge of our solar system was low, but [we] couldn’t be more delighted with what we see.

NASA releases this photo which shows Pluto’s reddish color and Charon’s gray tone. Scientists think Pluto’s red color is the result of particles created in its atmosphere, through methane’s interaction with UV light. The particles stick together, growing heavier, and eventually rain down on the surface. Observations show that Charon does not have much of an atmosphere.

For now, all that we can say is, it’s a much more rarefied atmosphere [than Pluto’s]. It may be that there’s a thin nitrogen layer in the atmosphere, or methane, or some other constituent. But it must be very tenuous compared to Pluto — again, emphasizing just how different these two objects are despite their close association in space. 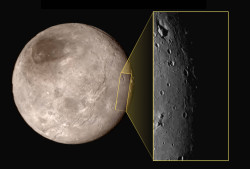 NASA shares a close-up photo of Pluto’s moon Charon showing a large mountain in a deep depression that is puzzling scientists.

The most intriguing feature is a large mountain sitting in a moat. This is a feature that has geologists stunned and stumped. It looks like someone just dropped a giant boulder on Charon. 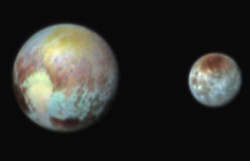 NASA releases color images of Pluto and Charon. The heart shape on Pluto is different colors indicating different geologic, tectonic, or morphological origins. The big red spot near Charon’s north polar region are most likely nitrogen particles from Pluto. The sun burns off the particles on the areas facing the sun, but not the polar region which faces away from the sun for decades.

Some regions are relatively ancient, and other places are very young and currently undergoing geologic evolution.

The size of Pluto has been debated since its discovery in 1930. We are excited to finally lay this question to rest. 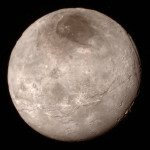 New Horizons takes a photo of Charon from 466,000 km (289,000 miles) away. A series of cliffs and valleys stretch about 1,000 km (600 miles) from left to right, suggesting widespread fracturing of Charon’s crust. At upper right is a canyon about 7-9 km (4-6 miles) deep. The north polar region reveals a dark spot suggesting a thin deposit of material. The lack of craters suggests that the surface is still young being reshaped by geologic activity. 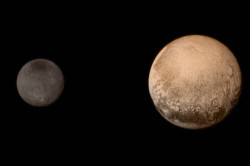 The team puts together a photo from New Horizons LORRI and RALPH showing a portrait of Pluto and Charon as the probe makes its final approach.

NASA releases photos that show Pluto’s two different faces. The right photo shows a series of four evenly spaced dark spots along the equator. The left photo shows the hemisphere the probe will view as it flies by.

It’s a real puzzle—we don’t know what the spots are, and we can’t wait to find out. 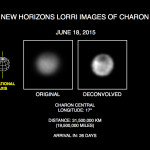 NASA releases a photo of Charon showing a dark region near its north pole.

The unambiguous detection of bright and dark terrain units on both Pluto and Charon indicates a wide range of diverse landscapes across the pair. . . . And about Charon—wow—I don’t think anyone expected Charon to reveal a mystery like dark terrains at its pole. Who ordered that?

What's this? This is an unbiased just-the-facts news timeline ('newsline') about Charon, created by Newslines contributors. Make it grow it by finding and summarising news. Learn more