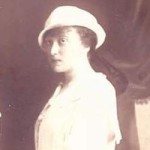 Chaya Mushka (Moussia) Schneerson is born in Babinovitch near the city of Lubavitch, the second of three daughters born to the sixth Lubavitcher Rebbe, Rabbi Yoseph Yichak and the Rebbetzen Nechama Dina. She is schooled at home due to the mounting antisemitism and lack of Jewish education where she lived. While still a child she and her family had to flee for fear of being harmed to Rostov and then Leningrad. From a young age she aided her father and grandfather in disseminating Torah Judaism. Her Grandfather the fifth Rebbe of the dynasty sent a telegraph on the occasion of her birth stating:

Mazal tov on the birth of your daughter …if she has not yet been named, she should be called Chaya Mushka (the name of the wife of the Tzemach Tzede, the third Lubavitcher Rebbe).