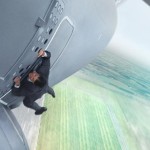 Pegg and the film’s director, McQuarrie talk about Cruise’s plane stunt in Mission Impossible – Rogue Nation. In the stunt Cruise, as superspy Ethan Hunt, runs along the wing of an Airbus A400 military transport aircraft, then leaps to a side door on the fuselage and hangs on while the aircraft takes off. Pegg:

When you see the movie, you know he survived because he’s been doing press for it and there’s been no national mourning. But when you’re actually on the ground and watching him on the plane, there’s a whole other degree of terror because you don’t know how it will turn out.

McQuarrie says Cruise’s safety and harness were rigorously tested and that the actor had to wear special contact lenses to keep the wind shear from blasting out his eyeballs.

We could have certainly done (a version of the stunt) with a green screen and giant fans. The studio probably would have been happier. But don’t ever mention the words ‘green screen’ around Tom Cruise.