The couple wed  at L.A.’s Vibiana, the bride wore a white-lace strapless gown with a flared skirt and she carried a bouquet of dark purple flowers.  Her hair was styled in long flowy waves around her shoulders. The bridesmaids wore midight blue dresses. The actress tweets:

The most important thing is that the day feels authentic to us. We’re traditional, but also a bit wacky. 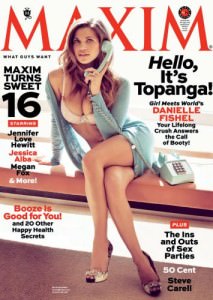 Fishel appears on the cover of the April 2013 issue of Maxim magazine. She talks about her girl crush and how she embarrasses herself.

If you ever really want to see me embarrass my­self, put on some Notorious B.I.G. and watch me grab my crotch and mouth all the words. It’s really embarrassing, but I can’t help myself. Fishel appears on the cover of the April 2013 issue of Maxim magazine. She talks about rumours that she dated her co-star on the show Boy Meets World.

That rumor was entirely my fault because I once said, on The Tyra Banks Show, that Ben and I went on a date, and that turned into ‘Danielle and Ben dated’. We went on one date, when I was about 15, and by the time the dinner was over we realized mutually that we were more like family than lovers.

Fishel gives her thoughts why the ABC show Boy Meets World is so fondly remembered:

We were in people’s family rooms every Friday for seven years. When I watch old episodes, it’s like watching home movies, so I imagine that other people feel the same way. ABC’s TGIF lineup was probably the one time a week when parents and kids all watched TV together.