Ben-Gurion dies at Tel HaShomer, Ramat Gan, Israel, due to the brain hemorrhage suffered two weeks before. Flags fly at half mast and thousands pay respects as he lies in state in the courtyard of the Israeli Parliament, the Knesset, in Jerusalem. He is buried next to his wife, on the cliff overlooking the Zin valley, Sde Boker, Israel. 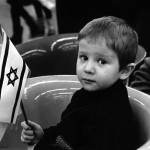 David Ben-Gurion (originally named David Gruen) is born in Plonsk, Russian (now part of Poland), to Avigdor Gruen, a lawyer, and Scheindel Gruen (nee Broitman). His mother dies when he is 11. He goes to school at a small Hebrew institution run by his father. Ben-Gurion is one of 11 children but only two brothers and two sisters survive. Shimon Peres:

Ben-Gurion’s father Avigdor, a lawyer, was among the first in Plonsk to set aside the more traditional Jewish garb in favor of the frock coat and winged collar that suited his profession. As a result, Ben-Gurion grew up in a fiercely socialist and Zionist home during a time when European nationalist movements were arbitrarily determining who did and did not fit their particular definition of citizenship.