McGregor reveals he, and Dee Devlin, are parents for the second time, as he heads home from the hospital with his new baby. He posted a photo of himself on Instagram, from-the-back, holding a baby seat and the hand of his oldest son, Conor Jr., with the caption:

Heading home with my two healthy babies and an energized and healthy SuperMam. 2019 is off to the best start!

On McGregor’s 30th birthday, Devlin announces that she is pregnant with the couple’s second child.

Happy 30th birthday babe! Thank you for being you! Love you to bits from me, Conor jr and the bump ❤

McGregor and Devlin christen their son.

McGregor and his partner will host a premiere party for his upcoming movie, Notorious, in Dublin on November. Members of McGregor’s family will also join the event, including his mother and father and sisters, Aoife and Erin. The film’s director confirms McGregor himself will be on hand to host a red carpet event in Dublin to celebrate the launch:

The world premiere will be on November 1 in Dublin and Conor will be there and some other big names. It’s going to be a big red-carpet event. Conor really wanted the premiere to be in his hometown. The film will debut here and be released worldwide throughout November…There were times when Conor would tell all the cameras to leave but then say ‘You guys can stay’. We were pretty invasive but Conor was really comfortable with us.

McGregor parties at wedding of childhood friend Tom Devitt, in Ibiza, still sporting a black eye from the fight. He is accompanied by his mother, Margaret, and partner, Dee. McGregor congratulates his friends and looks forward to the party.

The Mirror reports that McGregor and long-term partner, Ded Devlin, are to marry after his fight with Mayweather. Sources:

Word is 2018 is when he’ll take the plunge. The last few years have been all about his career and becoming a family. The Mayweather fight has taken up much of his time this year, but he’s taking a break after it. It’ll be the biggest wedding Dublin has seen. Conor doesn’t do things by halves. All he has to do now is pop the question.

Dee and Junior are doing great everyone! Thank you for all the kind words, I am one proud and blessed Daddy ❤️

There’s great news for the McGregor’s and the Devlins. Baby Conor Jack McGregor was delivered last night at 8pm in the Coombe Hospital…He came in at 8 pounds 14 ounces. The whole family are absolutely delighted. We’ve experienced this recently with our eldest daughter and there’s no better feeling in the world than being a grandparent. The parents are absolutely over the moon and everyone is healthy.

Thanks everyone but we are “not there yet” He a true McGregor, he rushes for nobody hahaha

McGregor posts an image with Devlin in the hospital.

In the hoppo not there yet ??

McGregor takes a photo with Devlin from inside his car, while she puts her feet up on the dashboard.

Keeping the pregnant feet up.

A video is released of Devlin’s baby shower, which was attended by her friends and family, including McGregor. McGregor’s mother:

I couldn’t ask for a better person to be the mother of my Grandson. Love you loads, and the best of luck. McGregor and Devlin attend a baby shower. Their as-yet-unnamed boy is expected to arrive in May.

McGregor sends a Mother’s Day message to his wife and mother.

Devlin shows off her baby bump at McGregor’s nephew’s christening.

McGregor and Devlin have told friends that they will name their baby boy after a famous fighter, but have not told them the name yet. Source:

Conor and Dee have had loads of suggestions from friends and have been reading up on names since it was confirmed they’re expecting a boy. They’ve both said they like the name of a fighter most fans would recognise and they seem pretty settled on it. Conor has told a few friends that’s the name.

McGregor’s sister Erin says she has been giving her brother and Devlin parenting advice.

Conor’s very excited. He’s going to be an amazing dad I have to say.He’s really good with Harry and he’s really good with Taylor, his other niece. We’re all really excited for him. Dee is brilliant, she looks amazing. She’s blooming. We’re just so excited now. We’re helping her pick out clothes. Because my baby is only just six months, we’re able to literally share things. I’m saying, ‘this happened to me’ and ‘this is normal’ so it’s really good. They’re literally going to grow up best of friends. At the moment his priority is obviously having a little bit of time out and being there for the baby which is really important.

At the An Evening With... event in Manchester, McGregor says he is having a boy with Devlin.

I’m going to be training that child around the room. I’m going to train him to kill. I’m so nervous. She’s gonna kill me now. [Dee] is amazing. She’s glowing. I hope it just settles me…I’ve gone off the rails a little bit since that fight.

Video is released of Devlin watching McGregor fight at UFC 205 against Eddie Alvarez.

At the UFC 205 post-fight press conference, McGregor announces that he and Devlin will have a child in May 2017.

I’m gonna be a daddy next year. I’m crappin me jocks. 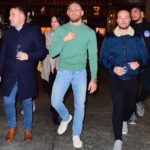 McGregor and Devlin walk around New York with his entourage. They visit Cartier jewellers on 5th Avenue and stop to sign autographs for fans. They also stop by a pizzeria but McGregor leaves with only a gallon of water.

Wherever I choose to go, I’m prepared to go there. I feel great at this weight. I mean I’m a lot leaner, I’m still eating a hell of a lot of food.

According to friends, McGregor is planning to take a one-year break from UFC after 205 to settle down with Devlin, his long-term girlfriend. McGregor is set to make an announcement after the fight, but it it is not known whether it concerns a break. There has been no official statement from McGregor. Source:

He’s telling people he wants time out. It’s unlikely to be permanent, but the time is right to step back for a while. He knows that if he wins UFC 205 he can always come back in a year or two for a mega money fight. He could name his price. He’ll be back.

The Mac Life releases a video of McGregor celebrating his birthday with Devlin in Las Vegas, by taking the head of a piñata, blowing out birthday candles, training with his team, and working out.

The Mac Life releases a video of McGregor and Devlin in Venice Beach riding Segways.

McGregor and Devlin host a UFC 200 after-party at Intrigue Nightclub in Las Vegas, with hundreds of fans in attendance. McGregor is surprised with an early birthday present – a huge three-tier cake adorned with a crown and Octagon fence.

McGregor and Devlin show off two Rolls Royces on Instagram.

Devlin says that, while training in Iceland, McGregor had a member of staff trying on presents for her, while on FaceTime.

What's this? This is an unbiased just-the-facts news timeline ('newsline') about Dee Devlin, created by Newslines contributors. Make it grow it by finding and summarising news. Learn more