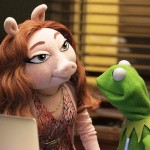 Kermit, who is still working with Miss Piggy on her late-night talk show Up Late with Miss Piggy – a situation that is being documented on the upcoming ABC series The Muppets – has been spotted around town numerous times with a head of marketing at ABC named Denise. Source:

She’s always stopping by the set of Up Late…He calls her his girlfriend.