Wrestlemania 13 is held at the Rosemont Horizon in the Chicago suburb of Rosemont, Illinois. The event features Bret Hart vs Steve Austin, Rocky Miavia vs The Sultan and The Untertaker vs Sycho Sid.

Wrestlemania 14 is held at the FleetCenter in Boston, Massachusetts. The event features Triple H vs Owen Hart, The Rock vs Ken Shamrock, The Undertaker vs Kane and Steve Austin vs Shawn Michaels with Mike Tyson as special outside enforcer.

Wrestlemania 15 is held at the First Union Center in Philadelphia, Pennsylvania. The event features Hardcore Holly vs Billy Gunn, Mankind vs Big Show, Kane vs Triple H, The Undertaker vs Big Boss Man and Steve Austin vs The Rock.

Jericho makes his first appearance in WWE as the countdown clock runs down to reveal him as the millennium man. Jericho trades verbal blows with The Rock.

Wrestlemania 2000 is the 16th annual event and the first of the new millennium it is held at Arrowhead Pond in Anaheim, California. The event features Chris Benoit vs Kurt Angle vs Chris Jericho and Triple H vs The Rock vs Mick Foley vs Big Show.

Wrestlemania 17 is held at the Reliant Astrodome in Houston, Texas. The event sets a record-breaking attendance of 67,925 for the arena. The event features Kane vs Raven vs Big Show, Shane McMahon vs Vince McMahon, The Undertaker vs Triple H and The Rock vs Steve Austin.

Wrestlemania 18 is held at the SkyDome in Toronto, Ontario. The event features Rob Van Dam vs William Regal, Jazz vs Trish Stratus vs Lita, The Undertaker vs Ric Flair, Hulk Hogan vs The Rock, Edge vs Booker T and Triple H vs Chris Jericho.

Goldberg debuts on Monday Night RAW by interrupting The Rock and spearing him in the ring.

Johnson talks to WWE Magazine about stunt work in film and how it compares to in-ring action in the WWE.

Both are grueling and very physical. There are many comparisons that I can draw between the two, but what hits home is this: toughness and passion. Both my fellow Superstars and fellow Hollywood stuntmen are incredibly tough mothers who are driven by an amazing passion to perform

Rock and Cena defeat Miz and Truth in two-on-two competition in the special main event of WWE Survivor Series. Rock picks up the pinfall victory over Miz at twenty-one minutes and thirty-five seconds.

Wrestlemania 28 is held at Sun Life Stadium in Miami, Florida. The event features Kane vs Randy Orton, Big Show vs Cody Rhodes, The Undertaker vs Triple H, CM Punk vs Chris Jericho and The Rock vs John Cena.

Johnson defeats Cena in singles competition at Wrestlemania 28. The match is billed as “Once in a Lifetime”. Johnson picks up the pinfall victory after delivering a Rock Bottom at thirty minutes and thirty-five seconds.

USA Network airs the 1,000th episode of WWE Monday Night RAW live. The special features appearances By The Rock, D-Generation-X and Brock Lesnar as well as Christian vs Miz, Lita vs Slater and Punk vs Cena for the WWE championship.

The Rock defeats Punk in singles competition at Royal Rumble to win the WWE Championship. Rock picks up the pinfall victory at twenty-three minutes and nineteen seconds.

The Rock defeats Punk in singles competition to retain the WWE Championship at Elimination Chamber. The Rock scores the pinfall victory after delivering a Rock Bottom on Punk at twenty minutes and fifty-five seconds.

Johnson talks to Associated Press about wrestling John Cena again and balancing his crazy schedule never being too much to handle.

I never feel that it’s too much, because I’m aware of the plan. I put the plan together (laughs). But in that, comes really incredible challenges that require a lot of people to embrace the vision of it, to support it.

Wrestlemania 29 is held at MetLife Stadium in East Rutheford, New Jersey. The event features The Miz vs Wade Barrett, Mark Henry vs Ryback, Fandango vs Chris Jericho, The Undertaker vs CM Punk, Triple H vs Brock Lesnar and John Cena vs The Rock.

Cena obtains the WWE Championship at Wrestlemania 29 by defeating The Rock in singles competition. Cena picks up the pinfall victory after delivering and Attitude Adjustment at twenty-four minutes. 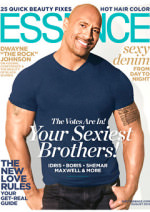 Johnson appears on the cover of Essence magazine to discuss his roles in Snitch; G.I. Joe: Retaliation; Pain & Gain; and Fast & Furious 6. He also talks about his love life.

I want someone who can trust that my big hands are going to take care of them.

Johnson stars as Hercules, a demi-god and son of Zeus who leads his entourage and an army to help end a war in the land of Thrace and return the rightful king to his throne. When asked about his iconic chain binding scene Johnson:

It was a great scene to shoot and that particular scene was the scene I looked forward to the most, because it’s the iconic scene. It’s the scene that, if anybody out there is familiar with the Hercules and the mythology of Hercules, when he finally accepts… his fate and his faith by the way being the son of Zeus, well he becomes more powerful.

Johnson plays Hercules in this fantasy action film directed by Brett Ratner, based on a comic book by Steve Moore. Hercules travels around Greece as mercenary selling his services for gold. His legendary reputation attracts the ruler of Thrace and his daughter to seek his help defeating a savage warlord. He realizes he has to embrace the Hercules myth and become a hero once again for good to triumph over evil. Co-starring Ian McShane, John Hurt, Rufus Sewell, Aksel Hennie, Ingrid Bolso, Reece Ritchie, Joseph Fiennes and Tobias Santelmann.

I did not have the juice to get this made 15 years ago.

Fans send me pictures of tattoos that they’ve gotten- of my face, a quote I’ve said, or of my Polynesian tattoo. It’s all love-crazy love- but it’s still love and I’ll take it.

Johnson announces via Titter that he will play Black Adam in an upcoming DC film based on the Captain Marvel comic book series.

"Kneel at his feet or get crushed by his boot." My honor to become.. #BlackAdam #TheAntiHero #DCComics pic.twitter.com/Qk55eNf3R7

Johnson talks to Muscle and Fitness about almost actually fighting John Cena backstage and his interest in returning to the ring.

We just have to figure out what it could be and what the most ideal matchup would be, and who it would be with. Because I always feel like if I go back to the WWE, then it has to be bigger and greater than what I’ve done in the past, and I don’t know what could be bigger in terms of marquee value—in terms of value across the board—and to me it has to surpass what we’ve done.

Johnson returns to WWE on Monday Night Raw to confront Rusev and Lana in the midst of their anti-American promo. Johnson attacks Rusev, forcing him to flee from the ring.

Johnson talks to a TMZ reporter about rumors that he will wrestle at Wrestlemania 31 due to his recent appearance on WWE Monday Night RAW.

Johnson side-swipes a pickup truck on his way to film a movie in Boston with Kevin Hart. Johnson relays the story via Instagram

You give me your info and I’ll leave you mine and I’ll take care of everything. He stared at me again, cocked his head sideways and said…’Uhhh.. Are you The Rock?’. I said ‘Yup’. He broke out into a huge smile and said ‘Wow, this is gonna be an awesome story!’. I started belly laughing at that, then he started laughing and before you know it we’re both standing in the middle of the street pointing to his mirror and laughing like two ol’ crazy buddies.

Johnson describes how he saved his puppy when it could not swim in the pool.

Johnson sends a Christmas message to Tommy Hanley, an Irish boy who has Stage 4 cancer.

Thank you Rock! Your work ethic is inspiring to me and I appreciate these words very much! Big respect my Uce.

What's this? This is an unbiased just-the-facts news timeline ('newsline') about Dwayne Johnson (The Rock), created by Newslines' contributors. Help us grow it by finding and summarising news. Learn more