A 6.8 magnitude earthquake hits Myanmar  just south of the ancient city of Bagan, a major tourist destination. The quake, which struck at a depth of 84 kilometres, swayed high-rise buildings in the Thai capital of Bangkok.

A strong earthquake in mountainous central Italy kills at least 38 people. The quake causes serious damage to a number of towns and villages, but did not seem to have hit heavily populated areas.

The quake with a magnitude of 8.3, centered about 144 miles (232 km) north-west of the capital, Santiago, kills least five people and causes flooding in coastal areas, and triggers tsunami waves up to 4.5 meters high (15 feet). Officials say it was at the depth of about ten km (six miles). One million people have been evacuated from their homes along the coast.

An earthquake measuring 5.7 on the richter scale strikes off the coast of Queensland about 110km east of Fraser Island at 1.38pm. Following this, there is another quake of 5.2 magnitude at 2.46pm in the same area as the first earthquake and then finally an aftershock measuring 3 at 4.30pm. There is no tsunami alert and there is no damage to property or life. The tremor is felt from Bundaberg to the Gold Coast. It is the strongest quake to hit Queensland since 1918.

A earthquake of 4.3 magnitude strikes in Fontana,California. The quake was felt over a wide area of the Inland Empire and eastern Los Angeles County. In the past 10 days, there has been one earthquake of magnitude 3.0 or greater centered nearby.

Developing a reliable approach that can separate potential earthquake-induced electromagnetic pulses from the myriad of natural and anthropogenic sources has been a significant challenge. We look forward to seeing the innovative ideas from this competition and learning more about this controversial phenomenon.

Schools in Nepal re-open after approximately ninety percent of nepalese schools were destroyed. Many schools are built out of temporary materials such as bamboo and tarpaulin, and are to be replaced with new, permanent buildings within the next two years. The United Nations sends educational relief packages with the intent of assisting students psychologically after the earthquake. School days are being shortened and focusing more on cultural activities in order to further assist with the aim of helping children recover from this disastrous earthquake.

The children are very happy here to engage themselves with different kinds of playing materials, recreational materials. 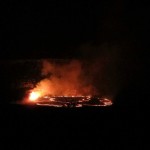 Snowfall, torrential slides and avalanches are suspended in three remote areas of Nepal after avalanches. Nepal Army’s salvage group had taken out 120 bodies, including those of nine foreigners, from the range. However, the status of 180 others is not known.

Surrounded by family in his hospital bed Khanal says:

I had some hope but by yesterday I’d given up. My nails went all white and my lips cracked … I was sure no one was coming for me. I was certain I was going to die.

He reports he was surrounded by dead people and a terrible smell. But he kept banging on the rubble all around him and eventually this brought a French rescue team that extracted him.

There was no sound going out, or coming in. I kept banging against the rubble and finally someone responded and came to help. I hadn’t eaten or had anything to drink so I drank my own urine.

Before going to surgery he says:

It feels good. I am thankful.

80 hours after the quake, a French search and rescue team finds twenty-eight-year-old Rishi Khanal under the rubble on the outskirts of Kathmandu after more than 10 hours of digging. The team uses specialized gear that detects signs of life. Khanal appears to have a broken leg. Doctor:

It seems he survived by sheer willpower.

The death count in the the Nepal earthquake has risen to 4,010 reported dead and 7,598 reported injured, however the Nepalese government speculates that the death toll may rise to over 10,000 dead over the coming days. Areas near Kathmandu are starting to return to a state of near normality with a return of some basic infrastructure but many rural areas are still cut off from basic necessities such as water, shelter and power. Prime Minister Sushil Koirala says that despite the influx of aid,

getting help to some of the worst affected areas is a major challenge.

We are working closely with the government of Nepal to provide assistance and support. Ambassador Bodde has issued a disaster declaration in order to immediately release an initial $1 million for humanitarian assistance. USAID is preparing to deploy a Disaster Assistance Response Team and is activating an Urban Search and Rescue Team to accompany disaster experts and assist with assessments of the situation. 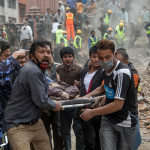 Tremors continue after the devastating earthquake in Nepal which leaves more than 1400 dead and thousands more injured. Officials fear the death toll will continue to climb before the aftershocks stop. The large area affected makes help difficult and people are frightened. Survivor:

There is no power and families are listening to the FM radio inside their cars. News of multiple building collapses. I’ve seen many cracked walls and roads and buildings. The (Dharahara, a landmark tower in Kathmandu) was packed with people a while ago. There are police everywhere trying to move rubble to make space on the roads for ambulances. Everyone is very scared.

A 7.9 magnitude earthquake strikes in Nepal only 2km below the earth’s surface. At least two are dead with many more injured. Tremors are felt as far away as Delhi. Reporter:

Massive tremors have been felt here in Delhi and several other parts of India. You can see pictures of our Delhi studios, where the windows rattled and everything shook for a very long time, for a minute perhaps or longer.

We don’t know about the casualties, we are flooded with calls.

We are in the process of finding more information and are working to reach out to those affected, both at home & in Nepal.

An undersea earthquake hits off Taiwan’s coast, causing an electrical transformer to explode and starting a house fire in Taipei. One elderly man is killed due to the fire. No other deaths and no significant damage are reported. The U.S. Pacific Tsunami Warning Center:

. . . [a] destructive Pacific-wide tsunami was not expected.

A strong earthquake shakes central Japan’s Nagano region injuring several people and collapsing a building in area village, the country’s Kyodo News Agency reports, citing firefighters. Reports of the intensity of the quake, centered in the Nagano area at 10:08 p.m., differ. The Japan Meteorological Agency reports it is a 6.8 magnitude temblor; the U.S. Geological Survey says it is magnitude 6.2.

A 3.4-magnitude earthquake rumbles through northern California early in the morning. According to the U.S. Geological Survey, the epicenter is five miles from American Canyon, seven miles from Sonoma and 50 miles from Sacramento. The temblor occurs at 1:56 a.m. Pacific time at a depth of 6.2 miles. There are no reports of damage so far, the Napa County Sheriff’s Office said.

A 6.0-magnitude earthquake strikes Northern California according to the U.S. Geological Survey. One “young child,” a girl, is in critical condition, Napa Division Fire Chief John Callanan says at a news conference. She is hurt when a fireplace collapses. It is the strongest earthquake to hit the Bay Area since 1989, when a quake struck during the World Series.

A  6.8 magnitude earthquake struck off the coast of Japan early Saturday morning. The quake was centered off of Honshu island and was 7 miles deep. A tsunami warning was issued but later changed to an advisory.

Mexico’s Chiapas state is suffering from a 6.9 earthquake. A man living in the town of Huixtla is the only casualty. Shaking from the earthquake can be felt in nearby Guatemala.

A 5.5 magnitude earthquake hits in South Africa with its epicenter close to Johannesburg, South Africa. One person is reported to have died. The quake was felt as far a field as Durban, Zimbabwe and Swaziland.

A massive earthquake of magnitude 8.2 strikes off the coast of northern Chile, triggering a tsunami, according to the U.S. Geological Survey (USGS). A tsunami warning is in effect for the coasts of Chile, Peru and Ecuador; waves nearly 7 feet (2.1 meters) high are reported in Iquique, according to the PTWC notice. A tsunami watch is issued for Colombia, Panama, Costa Rica, Nicaragua and El Salvador. There is also a tsunami advisory in place for Hawaii, where swimmers and boaters are warned that they could see bigger waves than usual.

A colossal earthquake begins to shake the northern part of Sumatra and the Andaman Sea to its north. Seven minutes later a stretch of the Indonesian subduction zone 1200 kilometers long had slipped by an average distance of 15 meters. A large tsunami triggered by the earthquake spread outward from off the Sumatran coast. The worst part of it washed away whole cities in Indonesia, but every country on the shore of the Indian Ocean was also affected. In Indonesia, some 240,000 people died from the quake and tsunami combined. About 47,000 more people died, from Thailand to Tanzania, when the tsunami struck without warning.