Redmayne has been offered the role of Newt Scamander in Warner Bros.’ Harry Potter spinoff, Fantastic Beasts and where to find them. Scamander is described as a “magiczoologist,” a person who studies magical creatures. Besides Scamander, there are four other main roles — two American girls and two American boys — that the studio is looking to cast. Redmayne wins the Oscar for best actor for his portrayal of Stephen Hawking in The Theory of Everything.

I am fully aware that I am a lucky, lucky man. This belongs to all of those people around the world battling ALS. It belongs to one exceptional family [the Hawkings]. […] I will be its custodian. I promise you I will look after him. 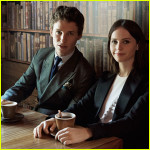 Jones and Redmayne are featured in Yahoo Style. Felicity talks about working with Redmayne for the first time. Redmayne discusses four months of visiting an ALS clinic and if his next role can live up to his role as Stephen Hawking.

Oh, God, I don’t think I can ever think that way. If our dream is to create interesting stories and play interesting people, they don’t come more extraordinary than Stephen and Jane. I think it’s so rare in one’s lifetime to get the opportunity to tell one of those. I feel really lucky for that. I try not to think of my jobs as competitive with each other. Just retaining employment, frankly, is a wonderful thing. Redmayne appears on the cover of the February 2015 issue of Interview magazine. He talks about reality television, his fears, and eating habits.

My fiancée saw some photos of me at the L.A. premiere, and she’s like, ‘Ed, you’re looking underweight.’ I said, ‘Baby, I’ve got loads of sushi and juices.’ And she was like, ‘That’s not what I’m talking about! I’m talking a f-cking gigantic bowl of spaghetti Bolognese and a burger.’

I am happy to confirm that Hannah and Eddie married today. They celebrated with a small number of close family and friends.

Redmayne is nominated for a Golden Globe for best actor for his portrayal of Stephen Hawking in The Theory of Everything.

It’s the most wonderful thing. When we first started working on this film … we all felt such a sense of privilege, but also a great sense of responsibility because we were depicting these extraordinary people.

Redmayne is nominated for a Screen Actors Guild Award for Outstanding Performance by a Male Actor in a Leading Role for his portrayal of Stephen Hawking in The Theory of Everything.

To be nominated by my peers, and to be included in a list that is comprised of so many actors I admire, is an incredible honor. And to be recognized alongside Felicity and my castmates means the world. Huge, huge thanks to SAG-AFTRA; I am beyond grateful. Redmayne appears on the cover of the November/December 2014 issue of The Mr Porter Post magazine. He talks about having a meltdown and Stepheh Hawking’s reaction to The Theory of Everything.

I met him again just before he saw the film. I said, ‘Stephen, I hope you enjoy it, and please let me know what you think.’ A minute or two passed as he typed away with his eye-tracking software. Then, in that famous, vaguely robotic voice, he replied: ‘I will let you know what I think. Good, or otherwise.’ Redmayne appears on the cover of the December issue of Gotham magazine. Redmayne discusses portraying Stephen Hawking in The Theory of Everything with fellow actor Andrew Garfield, who interviews him for the magazine.

Stephen has so much humor. It’s very difficult for him to communicate—now he can only do so using an eye muscle—yet he has the most fiendish timing. I belly-laughed a lot in his presence. That’s something we really tried to bring into the film, to always find the positive. Hearing the audience laugh at that premiere, and to have them feel like they were allowed to laugh, despite the subject matter—a family dealing with gritty obstacles—made me so happy. Because that’s the feeling I had when I left my meeting with Stephen. He’s had a guillotine over his head since the age of 21, yet he lives each moment hopefully, and lives life with humor. When I saw the audience responding to those parts of the film, I was thrilled. 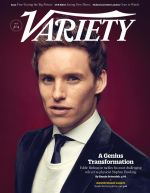 Redmayne appears on the cover of the October issue of Variety magazine. Redmayne discusses being compared with fellow British actor Benedict Cumberbatch in an interview with the magazine.

I totally see why people are (comparing us), because of the subject matter; we both play geniuses. But I won’t be engaged in that. I think he’s the most beautiful actor. I’ve long admired his work, and continue to do so. I hope there’s room for both our films. There was this hilarious moment when we were shooting a scene at Harrow School. There was a wooden board with names engraved on it, and by my head was ‘B. Cumberbatch.’ I’m like, ‘Dude, you’re haunting me!’ I took a selfie of me dressed as Stephen and sent it to Ben.

Redmayne plays Stephen Hawking in The Theory of Everything. Redmayne:

This man had discovered how the universe operates and I explained how, for the film, the complexities of physics had to be pared down to present it all as simply as possible. I apologised to him for having studied art history. He understood and smiled.

Redmayne is engaged to his girlfriend of over two years, Hannah Bagshawe. Source:

He had been planning on it for awhile. They have a very relaxed and supportive relationship … they seemed to have always known they were going to spend the rest of their lives together.

There are a lot of aspects to his character that are deeply irritating. Various extraordinary people die for him. Everyone is giving up their lives, and he is sort of blindly going through. In our adaptation, he is this romantic prototype, but there needed to be something else in him so that the audience doesn’t want to slap him from the word go. We went back to the novel, where he ends up taking a keg of powder and is willing to kill himself and all the people around him for the cause. We added that back in. He’s not in any way a hero. He is complicated. So in the end, he is human and flawed but goes through this extraordinary transition from boy to manhood. That’s what I cared about.

Redmayne wins a Tony Award for Best Featured Actor in a Play for his portrayal of Rothko’s assistant Ken in Red. Redmayne praises his co-star:

Above all, ’Alfredo’ Molina, You are a king among men. It’s been a treat and a joy and a pleasure working with you.