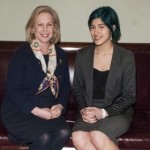 [Sulkowicz is] a woman of great courage who got no justice

Sometimes it takes a federal hand to make the colleges listen. I feel so excited. It’s a dream come true. The piece I am doing is not just based on Columbia. It’s based on all survivors’ experiences at every college, so I hope that when people think of my art piece they don’t think of it as just a Columbia piece. I hope they think of it as something that is meaningful to every person that’s ever been assaulted.

What's this? This is an unbiased just-the-facts news timeline ('newsline') about Emma Sulkowicz, created by Newslines contributors. Make it grow it by finding and summarising news. Learn more