Newcastle United sign Ferreyra to a one season lone deal. The player is coming over from Ukrainian side Shakhtar Donetsk. The 23 year old’s contract includes an option for the Magpies to buy the forward, should they want him to remain at St James’ Park longer. Newcastle coach Alan Pardew is pleased with the acquisition:

This is a player who has played at the top level and is highly regarded in Argentina. 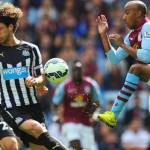 Dyer gives his side the lead in the 23rd minute after Micheal Duff hesitates on closing him down. Swansea use the 4-2-3-1 against their opponent’s 4-4-2 and this proves significant. He takes possession motors away from Ben Mee and carries on his surge into the area when Duff continues to back away and Tom Heaton gets a hand to the nearest post shot but not enough to stop it and so a goal. Burnley get their chance too through David Jones but his shot across goal goes wide.In the first half we controlled the game. Monk:

There are times when you have to dig in and the boys were magnificent in that respect. I have been involved in so many games where we play well and get nothing. Six points in two games is all you can ask for

I was just explaining to them that we showed too much respect in the first half, That can happen to promoted teams. I have been through it myself.
We are not naive enough to think the growth period doesn’t have to be quick because it does. The last point was telling. Indeed, they learnt something of a lesson in the break, re-emerging with far more purpose and disregard for what was coming at them. 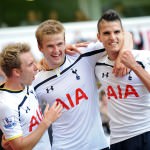 Nacer Chadli scores for his home team 12 minutes into the game and Eric Dier follows up his goal to net the second but before half time Chadli makes it 3 and Emmanuel Adebayor makes points certain with his 65th minute goal. Spurs mantain their winning streak, which puts them on top of the Premier League table. The referee disallows Romone Rose’s goal. QPR Manager:

We didn’t play well today, we started sloppy I thought

Tottenham manager Mauricio Pochettino enjoys victory over his former side as Christian Eriksen’s first half strike from the edge of the box gives the North Londoners a narrow but deserved win. Sadio Mane looks sure to grab a point for Southampton in the 84th minute but fails to convert the simplest of chances from Ryan Bertrand’s cross.  Southampton’s four-match winning run comes to an end and Spurs get back to winning ways after four league games without one.

On the 10th anniversary of the death of manager Bill Nicholson, Spurs lose at home to a Newcastle side that started the day in the bottom three. Spurs dominate the first half but only have a headed goal by Emmanuel Adebayor to show for it. Sammi Ameobe, a half time sub scores 7 seconds after the restart. Ayoze Perez gives the visitors the lead with a well placed header on 58 minutes. Spurs fail to produce a shot on target for the remainder of the game and are booed off the pitch at the end of their third defeat in five home league games.

Balotelli says he wants to stay in England and is drawing interest from Watford.

What's this? This is an unbiased just-the-facts news timeline ('newsline') about English Premier League, created by Newslines' contributors. Help us grow it by finding and summarising news. Learn more