Sidibe responds to critics of an Empire love scene with her on-screen boyfriend, in an EW blog post:

I, a plus sized, dark-skinned woman, had a love scene on primetime television. I had the most fun ever filming that scene even though I was nervous. But I felt sexy and beautiful and I felt like I was doing a good job. I’m very proud of the work we all did to make that scene a great opening for the episode. I keep hearing that people are “hating” on it. I’m not sure how anyone could hate on love but that’s okay. You may have your memes. Honestly, I’m at work too busy to check Twitter anyway. #Booked. Hope you enjoy next week’s show!

Entertainment Weekly interviews Jolie about how her children reacted to her playing the role of the villain in the film Maleficent.

I told my kids I was playing Maleficent and they went “She’s so scary!” and I said “Let me tell you the real story but you can’t tell anybody” so I put them in the room and I told them the [film’s] story. So this was my test too, like any parent. And the next day, I heard Shiloh getting into a fight with another kid, defending Maleficent. Saying, “You don’t understand her!” They got into a bit of an argument and I thought that’s the reason to do the film. It’s not just that there’s more to people than meets the eye, but that there’s injustice in the world and children get fired up about injustice. [They] want the character they believe in to get up and fight. And when that character makes mistakes — which Maleficent does, and crosses many lines you want them to be angry at her and concerned and confused and in the end, somehow understand something that they didn’t know before. 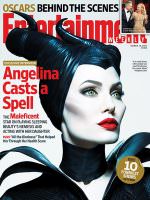 Jolie is featured on the cover of Entertainment Weekly. inside the issue Jolie talks about breast cancer and bonding with other cancer survivors.

Wherever I go, usually I run into women and we talk about health issues, women’s issues, breast cancer, ovarian cancer. I’ve talked to men about their daughters’ and wives’ health. It makes me feel closer to other people who deal with the same things and have either lost their parents or are considering surgeries or wondering about their children. I was very, very moved by all the support and kindness from so many people.