Bush accepts the challenge from several people, including his daughter Jenna. He states it is not “presidential” to have a bucket of ice water dumped on his head, but his wife Laura has other ideas.

Bush says he is glad to hear that West has had a change of heart after calling him racist. Bush say many Americans perceived him as uncaring and apparently detached from the disaster, and that hurt him deeply.

I appreciate that. It wasn’t just Kanye West who was talking like that during Katrina. I am not a hater. I don’t hate Kanye West. I was talking about an environment in which people were willing to say things that hurt. Nobody wants to be called a racist, if in your heart you believe in equality of race. 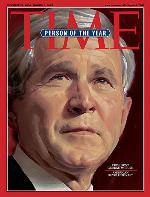 Bush joins ranks with six other former US Presidents when he is chosen as Person of the Year for a second time around.Time Managing Editor Jim Kelley explains the magazine’s decision:

Obviously many supporters of the president will be pleased, many people who do not support the president will probably sigh. But even those who may not have voted for him will acknowledge that this is one of the more influential presidents of the last 50 years. 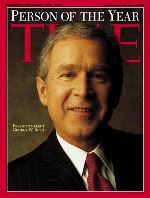 Bush is chosen as Person of the Year after the Supreme Court rules he is the new President of the United States, after campaigning against Al Gore in an election that  proved to be the closest race in the history of US voting. Bush is the first President to be awarded Time’s honor even before he begins his term. Journalist Barry Gray views Time’s choice as a political statement:

Bush was not elected president, he was selected by judicial fiat. He should, by rights, be called the president-select. The fact that this distinction has been universally ignored by the media and the political establishment is indicative of their desire to bury the events of recent weeks and, in the prevailing parlance, “move on.”