Carter and Moroder chat about music and technology at the DLD conference in Munich, Germany. Moroder talks about his upcoming album., digital recording, and recording Scarface. Moroder on digital:

I love digital. I think I was one of the first, if not the first one, to recorded a whole album only on digital. The album was called E=mc², which I recorded in Los Angeles, with a guy from Salt Lake City who invented the stereo digital, called Dr Stockham. I recorded the whole album in two days live. I have to wait for weeks for the computer to generate edits and cuts. 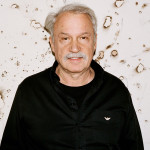 Moroder gives an interview to The Talks. He discusses how girls played a role in him going into the music industry and becoming a DJ.

No, I became a DJ by coincidence, because Louis Vuitton asked me to do a small, 15-minute set for one of their men’s shows in Paris and I liked it. Because of that Elton John’s company asked me to DJ at the amfAR gala in Cannes during the festival and then the Red Bull Music Academy asked me to do a little bit of teaching to the students and at the same time to do a DJ set in a great club in New York and that became a big success. So I continued and now I love it.