Panettiere books herself into a treatment facility seeking help with postpartum depression. Rep:

Hayden Panettiere is voluntarily seeking professional help at a treatment center as she is currently battling postpartum depression. She asks that the media respect her privacy during this time.

We are over the moon and madly in love! 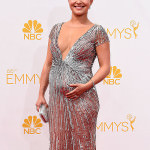 Panettiere and her fiance Klitschko are expecting their first child together. Panettiere accidentally reveals that she was pregnant with a girl. She says her pregnancy craving is chicken noodle soup.

Yes, it’s a little girl. I have to shop. I want to go shopping, I want to paint the room … I’m working with my amazing interior decorator. He’s trying to do something that she can grow up in and you don’t have to change everything.

Panettiere accepts the ALS challenge and nominates her unborn child.

Panettiere and Klitschko get engaged. She confirms the news on LIVE with Kelly and Michael. When Ripa notices the ring on Panettiere’s finger, she asks if she is engaged:

It might be … I mean, I think it speaks for itself.

Seacrest interviews Panettiere during On Air With Ryan Seacrest and asks her what Taylor Swift thinks of her  character on the TV show Nashville.

I first had a conversation with her because in the beginning it was all, “Okay, this character is definitely based off Taylor Swift.” And I did all this press saying, “No, no, no the character’s not.” And of course, the headlines read “Hayden Says I Am Not Taylor Swift!” So, I ran up to her and I was like, “I hope you don’t take it personally or take offense to it, this is not what I meant.” And she was like, “No, absolutely not.” Then she watched the show. She came up and she was raving about it to me, which was very flattering. Panettiere appears on the cover of the August 2009 issue of Seventeen magazine. She talks about dealing with the media and searching for a guy.

I don’t know how to date. I’m not good at learning that sometimes you don’t like someone in that way – and figuring out how to deal with that. Because I don’t want to hurt his feelings. Right now, I’m just enjoying having fun. It’s when your not looking for anything that something winds up coming along, whether it’s a best friend or a guy. 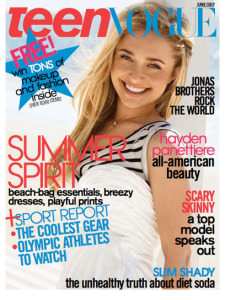 Panettiere appears on the cover of the June/July 2008 issue of Teen Vogue magazine. She talks about Hollywood only having bad girls, animal rights, and her fashion sense.

[Heroes] put me in a place to speak for things that I’m passionate about. When I was younger, I’d always donate to the humane society.

What's this? This is an unbiased just-the-facts news timeline ('newsline') about Hayden Panettiere, created by Newslines' contributors. Help us grow it by finding and summarising news. Learn more