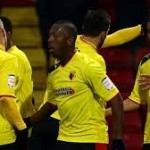 Troy Deeney puts Watford ahead in the 15th before Huddersfield level through Harry Bunn three minutes into the second half. Almen Abdi restores the lead in the 54th minute but Murray Wallace levels the score nine minutes later. In the 65th minute Watford lose Gabriel Tamas to a red card and it’s not long until substitute Keith Andrews heads in the 3rd in the 68th minute from a corner kick and then Almen Abdi makes  it four  in extra time and the ten-man side emerge victorious. Lillis:

I want the team to believe in their abilities and be positive. We have good players at this club. We just need better quality in the final third because, defensively, we have been okay. Nahki Wells puts Huddersfield in the lead in the 54th minute though minutes before first half the referee Tim Robinson sends off defender Murray Wallace. Robinson later refuses to award a penalty to Huddersfield when Tal Ben Haim fouls James Vaughan in the box. Charlton are still a goal down by the last-minute of the game. In the second minute of the extra five minutes they level the score through Igor Vetokele. Lillis:

I think it was a bit harsh. Joel Lynch was there so he is not the last man and I think we will appeal.I was disappointed with that decision and a few other decisions the referee made for both sides.