Interpol performs Barricade on The Late Show with David Letterman from their self titled album.

Interpol perform Lights on Conan from their self titled album. 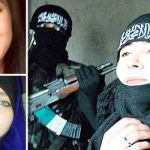 Interpol is searching for two teenage girls from Austria who are believed to have run away from their homes in Vienna to join ISIS. Samra Kesinovic, 16, and Sabina Selimovic, 15, have been missing since April 10. Photos on their Facebook pages apparently show them brandishing Kalashnikov rifles – in some cases surrounded by armed men. Some of the pictures have been circulating online for years, and their families believe that those pictures, and social media posts apparently by the girls, are fake. However, Austrian officials believe that the girls are located in a training camp, are already married, and are living in the homes of their new husbands. Facebook postings apparently from the two girls say that they planned to marry so that they could become ‘holy warriors’ and indicate that they are seeking martyrdom:

Death is our goal.

Interpol performs All The Rage Back Home on The David Letterman Show from their album El Pintor.


Interpol: "All The Rage Back Home" - David Letterman

Interpol releases the new video for single Twice as Hard directed by group member Paul Banks. Interpol will embark on a European tour this fall celebrating their fifth album.

Twice As Hard is lifted from the band’s fifth studio album and first record in four years, El Pintor.

Interpol - Twice As Hard
Do you love news? Help us add and summarize the world's news. Find out more