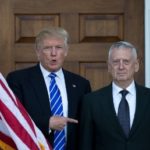 Trump says he has met with Mattis in consideration for Secretary of Defense. Transition team:

The President-elect and Vice President-elect were very impressed in their meeting with the ‘real deal’ and American hero General James Mattis,” according to a read-out of Trump’s meeting with Mattis provided by the presidential transition team. “They had an incredibly in-depth conversation on plans for national security.

General James "Mad Dog" Mattis, who is being considered for Secretary of Defense, was very impressive yesterday. A true General's General!