Amazon opens its online retail website to third party merchants for a small fee. The company adds 500,000 new products to its inventory (about four times the offerings of the average Kmart). Bezos:

Sixteen months ago, we were a place we could come to find books. Tomorrow, we will be a place to find anything, with a capital A.

Merchants pay $9.99 a month to list their products on the site, and Amazon in turn learns more about the spending and purchasing habits of its customers. 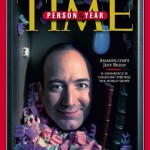 Time Magazine names Bezos Person of the Year. At 35 years old, Bezos is the the fourth youngest recipient of the honor. He is preceded by Charles Lindbergh in 1927 who was 25; Queen Elizabeth II, who was 26 in 1952; and Martin Luther King Jr., who was 34 when he was selected in 1963. Bezos:

This is an incredible and humbling honor. The Internet holds the promise to improve lives and empower people. I feel very lucky to be involved in this time of rapid and amazing change.

Time names people for “better or worse” who have shaped the course of current events. Bezos was selected for putting forth a new economy of Internet commerce.

In an alliance with Greenlight.com, Amazon announces it will offer a car-selling service on its website. Amazon customers can choose a make and model from various trucks and cars available. After making an initial deposit with a credit card, the car is then purchased at a local dealership, or delivered to the new owner’s home. Jupiter Communications predicts online car sales will account for a third of “auto-buying transactions” by 2004. Greenlight.com has agreed to pay Amazon $82.5 million over a five year period. Bezos:

This is where car buying is going, and we have to be there. As people buy more and more online, they are going to keep coming back to the site that makes it easy and secure for them no matter what category. Amazon says electronic books have surpassed traditional print book sales for the first time. The company accounts for about two thirds of  e-book sales. The company reports that it sells 105 e-books for every 100 print books it sells, including books that do not have an electronic version. The figures include sales of Kindle Singles, short form content from magazine and newspaper articles.  The company does not disclose its Kindle sales figures. Bezos:

We had high hopes that this would happen eventually, but we never imagined it would happen this quickly. We’ve been selling print books for 15 years and Kindle books for less than four years.

In an interview with 60 minutes host Charlie Rose Bezos reveals that the company has begun development on a drone delivery service to be called Amazon Prime Air:

It won’t work for everything. We’re not going to deliver kayaks or table saws this way.

When launched, customers will be able to order selected products and have them delivered to their doorsteps by a flying autonomous drone charted by exact GPS coordinates. According to Bezos, the drones will have been programmed with redundancies and reliability checks to prevent them from accidentally landing on someone’s head. Amazon says it will take the company “some number of years” to get the technology off the ground and gain FAA approval.

Amazon acquires Twitch, the live stream video gaming site, for over $1 billion after Google withdraws from the purchase. The deal includes a cash pay of $970 million, nearly 20 percent of Amazon’s reserve revealed in the latest quarterly report. Amazon now owns a “YouTube” type platform with the ability to reach the young men. During 2013, over half of the total viewership watched video game playing for 20 hours weekly. Bezos:

Broadcasting and watching gameplay is a global phenomenon and Twitch has built a platform that brings together tens of millions of people who watch billions of games each month.

Bezos sells more than 1 million shares of Amazon amounting to $532 million. It is his largest stock sale ever. He still owns nearly 83 million Amazon shares, or about 18% of the company.

Here’s why I’m writing you. The NYT article prominently features anecdotes describing shockingly callous management practices, including people being treated without empathy while enduring family tragedies and serious health problems. The article doesn’t describe the Amazon I know or the caring Amazonians I work with every day. But if you know of any stories like those reported, I want you to escalate to HR. You can also email me directly at [email protected] Even if it’s rare or isolated, our tolerance for any such lack of empathy needs to be zero…The article goes further than reporting isolated anecdotes. It claims that our intentional approach is to create a soulless, dystopian workplace where no fun is had and no laughter heard. Again, I don’t recognize this Amazon and I very much hope you don’t, either. More broadly, I don’t think any company adopting the approach portrayed could survive, much less thrive, in today’s highly competitive tech hiring market. The people we hire here are the best of the best. You are recruited every day by other world-class companies, and you can work anywhere you want.

I strongly believe that anyone working in a company that really is like the one described in the NYT would be crazy to stay. I know I would leave such a company. But hopefully, you don’t recognize the company described. Hopefully, you’re having fun working with a bunch of brilliant teammates, helping invent the future, and laughing along the way.

This is a truly amazing group of people. I won’t tell you the hundreds of calls we’ve had asking to come to this meeting. I’m here to help you folks do well. And you’re doing well right now and I’m very honored by the bounce. They’re all talking about the bounce. So right now everybody in this room has to like me — at least a little bit — but we’re going to try and have that bounce continue.

What's this? This is an unbiased just-the-facts news timeline ('newsline') about Jeff Bezos, created by Newslines' contributors. Help us grow it by finding and summarising news. Learn more