According to a previous post by McAfee, Wise had come to New Mexico to write about McAfee’s flying adventures for Wired magazine, and had spent the night with a woman who was not his wife. Their public display of affection had prompted McAfee to say to the other guests, “somebody get pictures of this to send to his wife in case we get a bad story from him”. According to McAfee, despite this being a joke pictures were actually taken and some of those did find their way to Wise’s wife. McAfee says Wise blamed him for sending the pics and apologizes on his blog:

I have erroneously accused Jeff Wise of improper behavior on a reporting trip that he did to my flying ranch in New Mexico. I finally received the photos from that trip and was going to publish them, and when I looked at them, to my horror, it was a different reporter (whose name I will obviously not release) from a different magazine, on a different trip. I wish that I could excuse myself due to the fact that I did dozens of interviews and appeared in dozens of magazines during my flying times in New Mexico, and could be expected to be confused, but that is no excuse. Jeff’s trip did not even include a campfire session…I was wrong. I apologize. I know that that does not help, but I am truly sorry.

John McAfee apologizes to me on his blog. http://t.co/cbeZWeI8 Wasn't expecting that! 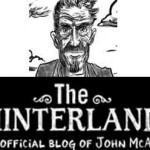 McAfee starts a blog called The Hinterland, the same name of an upcoming graphic novel about McAfee by Essley. In one of the first posts he takes issue with Gizmodo’s writer Wise:

How did I end up as a murder suspect on the lam? The world press certainly has not helped. Autonomous and self-serving, the press does what it does best – sensationalize. And my character and the recent events of my life have been sensationalized to the max. Take Jeff Wise and his recent posts to Gizmodo as an example. Jeff has made a life work out of smearing my character. Beginning with Fast Company some two odd years ago and continuing non-stop through the present, he has gone beyond the call of journalistic duty to bring my dark side to the attention of the world. You might think that moral duty or a search for the truth has been driving him. But, sadly, this is not the case.