Connelly plays Naameh, Noah’s wife, in this adventure drama written and directed by Darren Aronofsky. Naameh supports Noah (Russell Crowe) as he builds an ark to save humanity and animals from the upcoming flood. Co-starring Emma Watson and Anthony Hopkins.

If you read Genesis, she doesn’t even have a name. I don’t think that there’s anything wrong with being supportive, and devoted, and having faith. I mean, it’s a very particular circumstance – the creator has been communicating with Noah – so one understands her faith and following him. But, in the context of the story, I do think that she has extraordinary strength. 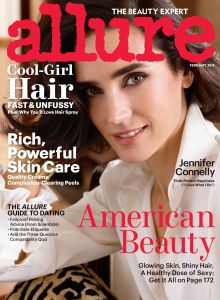 Connelly appears on the cover of the February 2014 issue of Allure magazine. She talks about the perks of acting in Shelter directed by her husband.

One couldn’t feel more safe as an actor than knowing that the director’s your husband. It’s like, Oh, if I really make a fool of myself, I can just say, ‘Honey, can you please not put that in the movie?

Connelly plays Alicia Nash, a college student, in this biographical drama directed by Ron Howard from the book by Sylvia Nasar. Alicia meets and falls in love with John Nash (Russell Crowe), a brilliant mathematician.  After they marry, she learns that he is schizophrenic. Co-starring Ed Harris, Christopher Plummer, and Josh Lucas.

It was, when I read it, I thought, such a beautiful script. I loved the story. I thought it was well handled. I thought it was even more moving because it was a true story and that made it even more poignant. Ron was involved, Russ was already involved – whom I think is a great actor. And the woman, no matter what kind of movie it is – studio or independent – was a kind of ferocious, spirited, intelligent, beautiful character, very strong woman, and I was drawn to her.

What's this? This is an unbiased just-the-facts news timeline ('newsline') about Jennifer Connelly, created by Newslines contributors. Make it grow it by finding and summarising news. Learn more