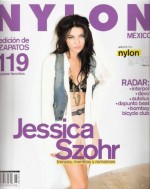 Szohr appears on the cover of the September 2010 issue of Nylon Mexico magazine. Szohr appears on the cover of the February 2010 issue of Teen Vogue magazine. She talks about being on television, her boyfriend, and how she got her role as Vanessa on Gossip Girl.

Two of my friends in L.A. invited me to this Labor Day barbecue, but I really just wanted to stay on the couch with my French bulldog. I remember hanging out by the pool in an old T-shirt and jean shorts, just talking to people. Three days later, my manager calls to tell me that I’d been with the show’s executive producer and one of the creators and they want me to audition.