Scott appears on the cover of Essence to discuss being unapologetic about her actions, music, and fashion. She only talks about people trying to warn her from moving in with her boyfriend too soon.

My only job is to be happy. So for everybody who cares about me and is not trying to be all up in a ‘celebrity’s business’ just know that I’m happy.

I’ll take something that’s a bit too small and just make it into something else.

We had to approach it very gingerly. The family is definitely involved in this film, and we didn’t want this to be the highlight of his existence. We look around and see pictures of James Brown when he went to prison…and they’re talking about drugs, but there’s so much more to this man. And when we approached this particular scene where there was some spousal abuse we were very careful about it because we don’t want to taint this man’s image or his legacy. 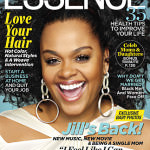 Scott appears on the cover of Essence magazine to discuss her string of lead roles in movies as well as her new album. She opens up about her life as a single mom and how her friends helped her get through the transition. On her son:

Ever since I had my son, I feel like there’s a stitch of lava in my spine.  I feel like I can do anything.

Scott wins the Grammy for Best Urban/Alternative Performance for Cross My Mind.