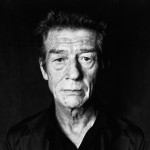 Hurt gives an interview to The Talks. He discusses the industry in the 70’s/80’s and the future.

I think one should be very careful of making things cut and dried or simplistic in that sense. For everything that you find dreadful, there’s usually something that is rather marvelous as well. And where humanity is going to find itself in say 20, 30, 40, or 50 years would be very difficult to predict, I think. There are moments of course when you think that it’s going from bad to worse, but there are other moments when you think that human efforts are really flowering into something really fantastic. It’s not something that can be either dismissed or accepted with any kind of simplicity.