Law is expecting a child with ex-girlfriend Harding. The baby will make a total of five children for Law, who is the father of Rafferty, Iris, Rudy and Sophia. Law’s rep:

I can confirm that Jude Law and Catherine Harding are expecting a child together in the spring. They are both wholeheartedly committed to raising their child.

In a six and a half minute advertisement film for Johnny Walker Blue Label, Law acts opposite Giancarlo Giannini  in scenes shot in British Columbia and London. The two men  wager for the ownership of a boat, with Law acting as himself. Directed by Jake Scott

The film is about improvement and progress and this is something I try to do in my work and my everyday life. I had to learn new skills shooting this film and that combined with the places we visited and shot in, alongside working with Jake and with Giancarlo, made it a truly rare experience. 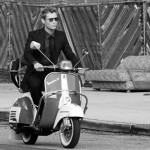 Law gives an interview to The Talks. He discusses whether he ever reads interviews and whether he considers acting an art.

It’s certainly a craft. Is it an art? Yeah, in certain ways it is. It depends on the director, it depends on the project, and it depends on the medium. In theater it feels like more of an art form than perhaps on film – in general. But in some films you are required to approach it like an artist and in others you’re about as artistic as the guys who are there to light it or to do the catering.

The Guardian interviews Law about his role in the play Anna Christie.

I guess part of it is simply wising up. Growing up. There’s an interesting scene in the play where my character criticizes his father, Chris, because he blames the sea for making his life a misery, whereas Mat loves the sea, the sea is everything. You rove the earth, he says, and you don’t give a damn for landlubbers, and yet what you’re actually hearing is the innocence of youth. And what’s happened to Chris is that life has happened to him. He’s lost his wife, he’s lost his brothers, he’s lost his father life has an effect on us all. It’s why we don’t look younger as we get older.

I was an optimist, a great champion of the human spirit. And I lost that for a time. I feel like I’ve regained a bit of that in the last few years but there was a period of my life in which I had a very low opinion of people in general. 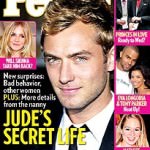 Law appears on the cover of People after he iscaught cheating with his nanny. Law was engaged to Sienna Miller at the time.

He’s going through a tough time. It’s very hard when you have to live out your life and your mistakes in public.