Cutler and Cavallari welcome son Jaxon Cutler to the world. He weighs 7 lbs 11 ounces at birth.

This one, I’m like, Let’s get him out here, I want to see him, I just want to hold him and see what he looks like.’ I’m just really excited more than anything. 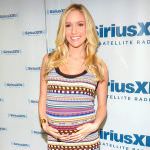 Cutler and Cavallari are expecting their second child together.

Thank you for all the love!! We are so excited for Camden to be a big brother!

The couple throw an intimate wedding with close family and friends at the Woodmont Christian Church in Nashville, Tennessee. The bride wears a strapless white gown, which has a high belt and bustled skirt, with a bouquet of matching white flowers. The groom wears a gray suit. The bridesmaids wear one-shoulder champagne colored dresses, carrying white and pink flowers. 150 guests celebrate with the couple at Houston Station for the reception. Cutler and Cavallari welcome son Camden Cutler into the world.

We are thrilled to welcome Camden Jack Cutler into the world. He was born this morning weighing 7 lbs., 9 oz. Everyone is doing great! Cutler and Cavallari are expecting their first child together.

We are thrilled to announce we are expecting our first child together. It’s an amazing time in our life and we can’t wait to meet the new addition to our growing family.

This time its official..Jay and I are engaged again 🙂

Seacrest interviews Cavallari during On Air With Ryan Seacrest about preforming on Dancing With The Stars.

You’re in there Wednesday, and you’re learning a whole new routine. You really have to have it done by Sunday because we have camera blocking. So if you don’t know it by Sunday, you’re pretty much screwed.

Cavallari joins Dancing With The Stars as a contestant. Cavallari will be performing with dance partner Mark Ballas throughout the season.

I don’t have any dance experience, so this is very new for me. I’m out of my element here. The only style of dance I would do is like bop around at a club.

Cavallari is cast in the That’s Beautiful To Me music video by Jaron and the Long Road to Love. Cavallari will star as the love interest of the lead singer in the video.

She couldn’t be more perfect for it, Jaron says. Sweet, kind, beautiful but doesn’t flaunt it kind of way, adorable and all other goodness. It’s gonna be awesome!

Cavallari stars in movie Wild Cherry. The film follows three best friends Helen, Katelyn and Trish—played by Tania Raymonde, Rumor Willis and Cavallari—that plan to get revenge on Helen’s boyfriend when they find out he is only dating Helen so that she’ll end up in the school basketball team’s “Bang Book.”

Cavallari joins the cast of The Hills. Cavallari is casted on the reality show as the main character and narrator replacing Lauren Conrad who has decided to move on from the series.

I’m a completely different person than Lauren. I have a lot more energy. I’m more outgoing. I’m a little more spontaneous. And she has a boyfriend so she’s not dating on the show. I’m very open to dating and finding a guy.

It’s a comedy about girlfriends that missed out on spring break because they were losers in high school, and now they’re older and they go on a college spring break. And that’s where I am. I’m in a (clique) called the Sevens and we’re, like, the bitchy, mean girls.

Cavallari stars in horror movie Fingerprints. Cavallari plays Crystal, the sister of main character Melanie, who sees the ghosts of children from an old ghost story that takes place in their neighborhood. The film also features Leah Pipes, Josh Henderson and Brittany Snow. Cavallari has mentioned she was working on a project but never spilled the details.

I’ve got something lined up, but I can’t say. You’ll find out soon enough. I’m really excited. It’s exactly what I want to do.

Cavallari guest stars on Veronica Mars. Cavallari plays a closeted lesbian cheerleader that asks character Veronica for help when she is threatened to be outed.

When they told me they wanted me to play a lesbian I thought it would be great. It’s such a perfect role for my first real acting job because it’s just so obviously different from what I am and that’s exactly why I wanted to do it.

That’s why I did this show, because it really touches you and it’s so emotional, but in a good way. It opened my eyes to a lot and made me realize how fortunate I am.

Cavallari stars in the MTV reality television series Laguna Beach: The Real Orange County. The series follows a group of classmates from Laguna Beach High School including co-star Lauren Conrad. Cavallari and Conrad are depicted as high school enemies and fight over a boy—Stephen Colletti—they both are interested in.

It really was presented to us like a documentary. Nobody thought it was going to blow up like it did … definitely a different way to grow up.

I grew up in Illinois and then Colorado before that, so I’m really not a California girl.