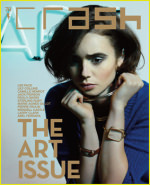 Collins appears on the cover of the December 2014 art issue of Crash magazine. She talks about her style, her future, and her character in Love, Rosie.

I really like that I got to portray a subject like teenage pregnancy, and show a deeper side of my character in the movie. Collins appears on the cover of the October 2014 issue of Marie Claire UK magazine. She talks about losing out on a Gossip Girl role, Kristen Stewart and Jennifer Lawrence, and not using her last name.

When I first met with agents I was asked, ‘Well, what makes you so special? Everybody in LA is a cousin or a daughter of someone.’ At the beginning, that was the most interesting thing about me. Now I’ve done eight films, it’s an afterthought. I get kids who say, ‘Oh, I love your movie, but my mum loves your dad.’ It’s really nice to be able to share that with him, but it doesn’t define who I am career-wise. Collins appears on the cover of the September 2013 issue of Glamour UK magazine. She talks about love scenes and her lunch with Kristen Stewart.

If I met Johnny Depp I wouldn’t know what to do with myself. Collins appears on the cover of the September 2013 issue of Seventeen magazine. She talks about style and her career inspiration.

I admire how [Jennifer Lawrence and Kristen Stewart] both handled the fame that came with those roles and their ability to step outside those roles and do other projects. That’s what I want to do balance fun big movies with gritty passion projects I love.

Seventeen Magazine interviews Collins about possible perusing a career in music as well as acting.

I love music. I’ve always loved it growing up, and I’d love to maybe do a musical movie. I don’t know when I’d have the time to actually have an album. Like, a song would maybe be one thing maybe for a movie like “I Believe” for Mirror Mirror, but that’s not my focus. Collins appears on the cover of the July 2013 issue of Glamour magazine. The cover photo is taken by Von Unwerth.

The Guardian interviews Collins about her acting career and growing up with Phill Collins as a dad.

I’m told more things than I actually remember, and now I’m running into these certain people who’ve seen me on billboards, and they come up to me and go ‘Gosh, it’s so funny I remember when you were on tour with your dad and I held you. Like Elton and people from that era.

Seacrest interviews Collins during On Air With Ryan Seacrest about when she found out she got the lead role in the film Mirror Mirror.

I found out on April Fool’s Day. So, my first reaction was that it was a complete and utter joke, which would have been the most horrific joke. But I broke down into tears and I was laughing and crying, it was an overload of emotions. Because I had literally auditioned the day before and it had happened so quickly. Collins appears on the cover of the March 2012 issue of Seventeen magazine. She talks about her eyebrows, her famous last name, and her celebrity crush.

It’s weird to have celebrity crushes now because I could actually meet them or work with them! When I was younger, it was definitely Leonardo DiCaprio in Titanic. I had pictures of him and I had ‘NSYNC posted. I had the biggest crush on Justin Timberlake! Collins appears on the cover of the October 2011 issue of Teen Vogue magazine. She talks about acting in Abduction, future acting goals, and flea markets.

My mother used to take me to flea markets in my stroller and I would just rummage through the piles. You’ve got to dig through the overstuffed racks that everyone else just walks by. It’s the only way to find the cool stuff.