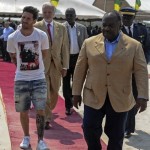 Messi visits Gabon and is driven around the country’s capital city Libreville by the president himself before heading to Port-Gentil to lay a foundation stone for the stadium. The government denies it paid him around $3.8 million to visit the country.

The Gabonese Republic strongly denies having paid, or having pledged to pay any amount of money to the international Argentine soccer player, Lionel Messi. Mr. Messi visited Gabon from the 17th to the 18th of July 2015 after having been invited by President Ali Bongo Ondimba.

The messiah of football arrived in Gabon like he were going to a zoo: dirty, unshaven and his hands in his pockets, looking for peanuts to throw to them! 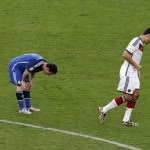 Messi vomits on the pitch in the first half of the 2014 World Cup final against Germany, but completes the match. The Argentina captain and striker for FC Barcelona in Spain’s Primera Liga says the incident is not unusual and that he has vomited in league and international matches, during training and at home. Team doctors are unable to determine the cause of the problem. In several matches, Messi has gone on to score after vomiting on the pitch.

Messi wins the 2014 World Cup Golden Ball award as the tournament’s top player as voted by FIFA. Although scoreless in the knockout stages, he scored four in the group and captained Argentina to its 1-0 final loss against Germany, the furthest the team has progressed in finals competition since 1990, placing him ahead of early tournament favourites Neymar of Brazil and Portugal captain Cristiano Ronaldo.

What's this? This is an unbiased just-the-facts news timeline ('newsline') about Lionel Messi, created by Newslines contributors. Make it grow it by finding and summarising news. Learn more