NASA says ‘dark finger-style’ marks that change with the seasons and were first spotted in 2011 by Ojha, using images taken by the Mars Reconnaissance Orbiter, are signs of water flowing under the surface of Mars. Ojha investigated the composition of these seasonal flows by studying their infrared wavelengths. In each location researchers found the presence of hydrated salts during the times when the flows are most extensive – suggesting a link between the two. In particular, evidence was found for sodium perchlorate, magnesium perchlorate and magnesium chlorate which are thought to be left behind when brine evaporates. Ohta:

The only thing we can really assert is that the places we’re finding are probably more habitable than the rest of the planet, which is bone dry.

NASA finds evidence that a massive ocean once covered one-fifth of Mars’s surface (nearly half of its northern hemisphere). The size of this body of water is comparable to Earth’s Atlantic Ocean; however the Mars ocean contained more water (20 million cubic kilometers) than the Atlantic contains now.

Ultimately we can conclude this idea of an ocean covering 20% of the planet which opens the idea of habitability and the evolution of life on the planet…e now know Mars was wet for a much longer time than we thought before…Ten years ago, the story of water on Mars was an occasional flood of rocky debris every 100m years that then switched off again. We now know it’s more continuous. There were long-standing bodies of water: lakes, deltas and perhaps even seas. 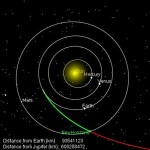