Black is born in Paisley, Scotland. Her father, Alan, is a retired teacher. Her first political memory is of being taken to march against the Iraq war – mainly because her aunt gave her a huge cherry lollipop called a “frying pan” that hadn’t been available in Scotland for years.

Marching was magic! But what I did notice was, with Labour it had always been, ‘Oh, they’re the good guys.’ And I remember seeing that change.

Black is elected in the Paisley and Renfrewshire South constituency, beating Douglas Alexander by more than 5500 votes (23,548 votes to 17,864), a 27% swing. Alexander held a majority of more than 16,000 before the election. She becomes the youngest MP since the 17th Century.

The people of Scotland are speaking and it’s time for their voice to be heard at Westminster. I make this promise…that is exactly what I plan to do…I think it’s truly because people have awakened to the fact this Westminster establishment has not been serving them and the Labour party in Scotland has not been serving them, and they must’ve felt that Douglas Alexander wasn’t serving them. What people are looking for is that change, an end to austerity and the SNP were the only ones offering that.

On a second referendum:

This election, we have continually said is not about independence, it’s about making sure the Westminster establishment works to the best it possibly can for Scotland.

Black says that she will continue to work on her politics degree, even though she has already become an MP. She still has one exam to finish and will return to Glasgow University at the end of the May.

I’ve worked hard for the last few years so I’m not going to chuck it now.“This is about making Scotland’s voice heard like it’s never been heard before and now we have got the chance to do that. 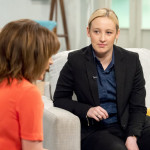 What's this? This is an unbiased just-the-facts news timeline ('newsline') about Mhairi Black, created by Newslines contributors. Make it grow it by finding and summarising news. Learn more