Kunis and Kutcher marry in a quiet ceremony at The Secret Garden at Parrish Ranch in Oak Glen, Calif. This is the first marriage for Kunis and the second for Kutcher.

I was devastated. I was weeping. I was dumbfounded…I was like, ‘Which chicken did I steal?’ I apologize to this woman, who was maybe or not a month old.

Karo sues Kunis for allegedly stealing her chicken as a child.

She [Kunis] fessed up to the chicken theft telling me, ‘Kristina, you can have any other chicken as a pet, you have a whole chicken farm.’ 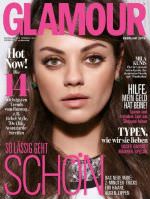 Kunis appears on the cover of the February 2015 issue of Glamour Germany magazine.

Kunis appears on The Late, Late Show in her first interview since giving birth. Kunis discusses motherhood and maintaining her post-baby body.

Breastfeeding is a great workout.

Kunis is selling her house. She reportedly wants to leave her current neighborhood because she is due to give birth soon, and she wants her child to grow up in an area that is more kid friendly. The asking price for the property located at 3028 Paulcrest Drive in Los Angeles is $3,995,000. Kunis confirms she is pregnant with her first child by fiance Kutcher.

Every day and every night, the paparazzi are parked outside my house. Today, I had to drive through the Warner Bros. back lot on my way here, just to throw them off. They want a shot of my stomach because they need proof of my pregnancy.

In this drama directed by Paul Higgis about three couples in three different cities who find love and heart break
Kunis plays Julia a mother in NewYork who is charged with attempt to kill her son then losing him to the father’s custody.She is fighting to win him over again.Co-starring:James Franco. Asked if it was fun playing her character:

Yeah, I loved it. First of all, I wanted to work with Paul [Haggis]. And then, reading the script and having it not be a girl next door character was a relief, so to speak.

Kunis and Kutcher are engaged. The couple have been dating since April 2012. Source:

Ashton and Mila have talked about getting married for quite a while. 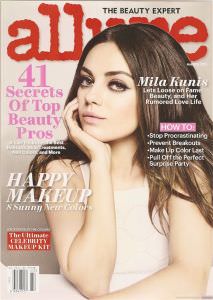 Kunis appears on the cover of the March 2013 issue of Allure magazine. She talks about being single and why she settled for a man she’s known for years.

So who you knew years ago is not necessarily the person that you [know now]…. And who somebody was yesterday is very different from who they will be tomorrow. 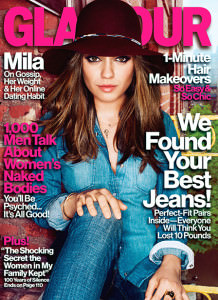 Kunis appears on the cover of the August 2012 issue of Glamour magazine. She talks about the dating website, OkCupid.

One of my really good friends met her fiance on an OkCupid-style website. OkCupid’s really popular–all my girlfriends have joined. I love those sites. I go on and I pick the guys for my friends. I think it’s great.

Kunis plays Lori in the movie Ted with co-stars Mark Walhberg and Seth MacFarlane. John Bennet is a grown man whose childhood wish was to have his teddy bear come to life.  After 30 years, Ted is still by John’s side, which annoy his girlfriend, Lori, who issues an ultimatum for John to leave his bear behind and enter adulthood.

You know what?  It actually wasn’t so bad.  I didn’t have very much physical interaction with the bear.  Mine was very circumstantial, whether the bear was to the right of me or to the left of me or to the front of me.  I think Mark had it the hardest.  For me, it wasn’t so frightening.  You have a stick and two eyes.  As far as the animation or the look of the bear, I was never too concerned with that.  There’s not a question of why MacFarlane can do that, and do it incredibly well. Kunis appears on the cover of the September 2011 issue of Glamour UK magazine. She talks about her co-star Justin Timberlake and her sudden rise to fame.

The industry can eat you alive.

Seacrest interviews Kunis during On Air With Ryan Seacrest about her film Friends With Benifits.

It is good in theory, but horrible in execution. As Justin and I put it this past weekend, you either get promoted or you get fired. It can’t last very long, because ultimately somebody will get feelings. Inevitably.

Kunis and Culkin has split after eight years of dating. Source:

The split was amicable and they remain friends.

What's this? This is an unbiased just-the-facts news timeline ('newsline') about Mila Kunis, created by Newslines' contributors. Help us grow it by finding and summarising news. Learn more