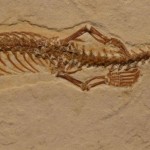 Scientists at the University of Portsmouth say the discovery of a four-legged snake shows that snakes evolved from burrowing lizards and not from marine lizards. The fossil, discovered in Brazil, and kept in Germany, has been named Tetrapodophis amplectus, (grasping four-legged snake), because its four limbs each ends in five seemingly functional digits that scientist say may have been used to grasp. It dates from the Cretaceous period and is 110 million years old, making it the oldest snake fossil discovered. Research head Dr. Martill:

It is a perfect little snake, except it has these little arms and legs, and they have these strange long fingers and toes. The hands and feet are very specialized for grasping. So when snakes stopped walking and started slithering, the legs didn’t just become useless little vestiges – they started using them for something else. We’re not entirely sure what that would be, but they may have been used for grasping prey, or perhaps mates.