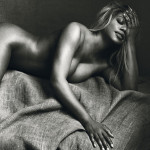 Cox appears nude in photos taken by Roy for Allure.

Going through life, you try to cover and hide, but it doesn’t really work. I said no initially, thought about it, and said no again. But I’m a black transgender woman. I felt this could be really powerful for the communities that I represent. Black women are not often told that we’re beautiful unless we align with certain standards. Trans women certainly are not told we’re beautiful. Seeing a black transgender woman embracing and loving everything about herself might be inspiring to some other folks. There’s beauty in the things we think are imperfect. That sounds very cliché, but it’s true.