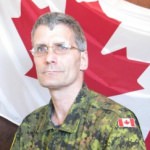 Quebec provincial police say the gold-beige colored 2000 Nissan Altima is spotted as early as 9:15 a.m. waiting in the lot in St-Jean-sur-Richelieu, located about 40 kilometres southeast of Montreal. It serves a number of provincial, federal and military administrative offices, as well as several commercial properties.