Paul steps up Jewish outreach efforts. He meets with Young Jewish Conservatives in his Senate office and proposes funding to the Palestinian Authority be eliminated unless it recognizes the Jewish state. At the Jewish Heritage Month event on the Capitol, the senator recalls his conference call with 72 rabbis:

I had a call today with a group of Rabbis.. and the introduction said ‘I think I can introduce him as a friend to Israel.’ And the way I responded is, that absolutely I am a friend of Israel.

Republican Jewish Coalition’s executive director, Matthew Brooks, says Paul has evolved since 2010 when he called Paul a neo-isolationist that made a lot of people in the Jewish community uncomfortable. 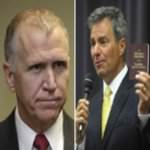 Tea Party candidate Greg Brannon doesn’t have the votes to force House Speaker Thom Tillis into a runoff. John Boehner, Mitch McConnell and Mitt Romney endorse Tillis. Some Republican strategists give him about a 75 percent chance of avoiding a runoff with Brannon.

the next president of the United States

Brannon trails House Speaker Thom Tillis in the polls. The speaker, who is expected to win the majority of primary votes, is endorsed by Jeb Bush, but Paul believes his support gives Brannon the momentum he needs to force a runoff.