In junior high he finds a copy of  Socialism

by Ludwig von Mises, thinking it to be a pro-socialism book. This spurs an interest in libertarianism and through high school he reads economics books by authors like Adam Smith, Milton Friedman, Fredric Bastiat, Leonard Reed, Henry Hazlitt and Friedrich Hayek:

The more I read the more I realized how government control and regulation is making the world a poor place. I learnt that if something’s worth doing, then you don’t need the government forcing people to do it because they will do it on their own.

He is particularly influenced by the writing of Murray Rothbard:

I devoured all of Rothbard’s books and was persuaded by the logic of his arguments. I remember being almost afraid to read such powerful truths. In all my years of schooling, no one before Rothbard had ever pointed out that taxation is the moral equivalent of theft, and the military draft is the moral equivalent of kidnapping and slavery. It shattered my remaining hopes that the State could be morally justified. For the first time I saw them for the criminal band of thieves, slave masters, and murderers that they are. My life has never been the same since.

While in college Ver founds Memory Dealers by buying computer parts from companies that had gone bankrupt after the dotcom bubble burst. He invests $1400 from a summer job into 14 nine-gigabyte drives which he sold on Ebay for $350-380 each. He quits college shortly after.

Ver becomes a Libertarian candidate for California State Assembly. Verr promises to cut as many taxes and repeal as many laws and says he will not accept any salary considering the money to have been taken forcibly by taxation.

In a debate at San Jose State University against the Republican and Democrat candidates Ver argues that taxation is theft, the war on drugs is immoral, and that the ATF are “a bunch of jack booted thugs and murderers,” referencing the recent situation in Waco, Texas. Ver claims that plain clothed ATF agents in the audience were very upset with the things he was saying.

Ver is prosecuted for selling a product on Ebay called “Pest Control Report 2000”, a firecracker used by farmers to scare deer and birds off their fields. Ver says he was the only merchant prosecuted, and that even the manufacturer was simply asked to stop selling the item.

The reasoning for the prosecution became crystal clear after a meeting with the US prosecuting attorney and the under cover ATF agents from the debate. In the meeting, my attorney told the prosecutor that selling store bought firecrackers on Ebay isn’t a big deal and that we can pay a fine and do some community service to be done with everything. When the prosecutor agreed that that sounded reasonable one of the ATF agents pounded his hand on the table and shouted “…but you didn’t hear the things that he said!” This summed up very clearly that they were angry about the things that I had said, not the things that I had done.

To avoid a seven or eight year sentence Ver signs a plea agreement and is sent to Lompoc Federal Penitentiary for ten months, followed by three years probation.

Before I went to prison, I had to lay off all the Memory Dealers employees. I taught my mother how to fulfil orders that came in when I was away. Then after I got out of prison, I worked on the business every waking moment to ensure I [would] have thousands of happy customers all over the world.

On the day his probation ends, Ver moves to Japan.

I didn’t do anything wrong. I didn’t hurt anybody. I had nothing but happy customers and the U.S. government locked me in a cage because of that. So I want nothing to do with those people. I don’t want to support them. I want them out of my life.

While visiting the US Ver hears about Bitcoin on a radio program. A month later, he hears about it again on the same program and starts to study the virtual currency in depth:

I realised it’s the best form of money that the entire world has ever seen. I literally got so excited because I felt my life’s calling had arrived in the form of Bitcoin. I didn’t leave my house for over a week and spent every waking moment reading every single thing I could find on Bitcoin. I got so sick from the lack of sleep that my friend had to take me to the hospital.

He buys his first Bitcoins at around $1.

After meeting with Karpeles, Ver makes a video statement:

Today I’m at the Mtgox world headquarters in Tokyo Japan. I had a nice chat with MTGOX CEO, Mark Karpeles, about their current situation. He showed me multiple bank statements, as well as letters from banks and lawyers. I’m sure that all the current withdrawal problems at MTGOX are being caused by the traditional banking system, not because of a lack of liquidity at MTGOX.

Shrem is arrested at JFK airport and charged with money laundering. Shrem, along with a co-conspirator, is accused of selling over $1 million in bitcoins to Silk Road users, who would then use them to buy drugs and other illicit items.According to the criminal complaint, Shrem allegedly also bought drugs on Silk Road. Manhattan U.S. Attorney Preet Bharara:

As alleged, Robert Faiella and Charlie Shrem schemed to sell over $1 million in Bitcoins to criminals bent on trafficking narcotics on the dark web drug site, Silk Road. Truly innovative business models don’t need to resort to old-fashioned law-breaking, and when Bitcoins, like any traditional currency, are laundered and used to fuel criminal activity, law enforcement has no choice but to act. We will aggressively pursue those who would coopt new forms of currency for illicit purposes.”

When we invested in BitInstant in the fall of 2012, its management made a commitment to us that they would abide by all applicable laws – including money laundering laws – and we expected nothing less. Although BitInstant is not named in today’s indictment of Charlie Shrem, we are obviously deeply concerned about his arrest. We were passive investors in BitInstant and will do everything we can to help law enforcement officials. We fully support any and all governmental efforts to ensure that money laundering requirements are enforced, and look forward to clearer regulation being implemented on the purchase and sale of bitcoins.

People own their own bodies, and have the absolute right to put anything they want into it. People like the FBI, and DEA agents who want to lock people in cages for buying, selling, or using drugs are the ones committing evil,  and they need to stop. I look forward to the day when they see the error of their ways,  and stop committing evil acts in the name of ‘law enforcement’.

The money laundering charge carries a maximum sentence of 20 years in prison. BitInstant is now offline.

Ver receives his St. Kitts passport. He abandons his U.S. citizenship by the end of February 2014.

I would have done it the same day if I could. They told me I had to have a one-week cooling-off period. They said, ‘Did you know if you renounce citizenship, you won’t be able to serve in the armed forces?’ It was like, ‘darn.’” 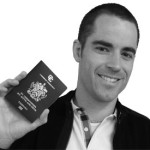 Ver founds passportsforbitcoin.com, to enable anonymous transfers of funds to St. Kitts, an island in the Caribbean, in exchange for second passports. St. Kitts allows second passports to be bought for either a US$400,000 investment or $250,000 donation. The passport allows visa-free travel to 120 countries. There are no taxes on personal income or capital gains and the islands’ restrictive disclosure laws offer shelter from outside scrutiny.

St. Kitts’ government is much more libertarian compared with the U.S.. It’s not even close. So all these early bitcoin adopters, of course if they have the means, they’d rather be a citizen of St. Kitts.

One target is wealthy Chinese who cannot get their money out of China:

The processing agent in St. Kitts told me he feels bad for all of his Chinese clients. They have to reach out to all different friends and relatives and get them to all send the money in drips and drabs. Bitcoin solves all of that. I’m going to China next month to explain to people that bitcoin is the easiest way to pay for things outside the country.

The post quickly receives over 15,000 retweets, or around $150,000, which Ver pledges will be give to the Free Ross Ulbright campaign. In a statement to Coin Telegraph:

I think that each individual owns their own body, and has the absolute right to put whatever they want into it.  The police, judges, and jail guards who lock people in cages for ingesting  substances without the permission of strangers, are the ones committing evil and need to stop. If Ross Ulbricht  is DPR and helped facilitate the these voluntary interactions,  he is a hero for helping provide the technology that allowed peaceful people to ignore the violent threats from strangers calling themselves politicians and law enforcement. If Ross is falsely accused,  and was not DPR,  then he deserves the best defense money can buy. Either way,  he deserves the support of anyone who is opposed to the war on drugs.

I actually think $2000 is a pretty conservative estimate. We don’t know for sure if it’s going to happen in this year, but there’s no doubt in my mind that Bitcoin’s price is going to be thousands of dollars and, almost for sure, tens of thousands of dollars for one. Currently, there are not enough bitcoins for every person in England to have one, and it is a worldwide currency that can be used by any person on the entire planet. If there are not even enough for each person in England to have one, the price of Bitcoin is going to have to be a heck of a lot more than it is today.

St. Kitts & Nevis refuses to recognize the cryptocurrency as a valid form of investment and threatens to revoke the licenses of any agents who do. In a statement titled ‘Warning!’ on the program’s website.

The local government says it only accept applications from licensed individuals, processed through internationally recognized banking institutions. Any agent found to be accepting Bitcoins for citizenship will have their license revoked.

The former Passports for Bitcoin website now redirects to Bitcoin.com.

Ver pledges $20,000 in matching donations to the Antiwar fundraising campaign, payable in Bitcoin, doubling his original pledge of $10,000. Director of operations Angela Keaton:

Roger has spoken out a lot on anarchism, he’s very outspokenly anti-war, and he’s a leader in the bitcoin movement … the way he talks about peace is really inspirational to a lot of us.

Ver announces the launch of Bitcoin.com, a collaborative platform to increase digital currency awareness. Community members can add posts, and the most upvoted post will win $1000 worth of Bitcoin. The site has a system where companies make public bids to have their ads displayed. Ver:

There has been a lot of suppression of ideas happening on other Bitcoin forums, and clearly lots of people are upset by this. It seemed like the perfect time to launch forum.bitcoin.com to give people a place where dissenting ideas are not suppressed.

What's this? This is an unbiased just-the-facts news timeline ('newsline') about Roger Ver, created by Newslines' contributors. Help us grow it by finding and summarising news. Learn more