Koeman says Barkley’s omission against Manchester City should act as a “wake-up call.” Barkley, who has already lost his place in the England squad, was an unused substitute in the game.

He was okay, very disappointed but you need to be disappointed if you don’t start. In my opinion it was the best lineup to have the best chance at Manchester City last week. If I am not totally happy or it’s a tactical question then he doesn’t start. I still believe in his qualities but maybe its a good wake-up call for him last weekend. He is already playing four years in the first team. You are not any more ‘a talent.’ That means you need to show more and improve. 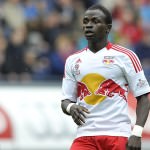 Mane signs to Southampton from Red Bull Salzburg for £10 million. The Senegalese forward has scored 45 goals in 87 games and can play either as winger or midfielder. Koeman:

It is incredible how many goals he has scored from his position, and I hope that he will do the same for us.