Biden arrives in Belgrade for a one-day visit. He expresses his condolences for NATO military action, before walking with Prime Minister Vucic in a picturesque borough of Belgrade, under high security.

I’d like to express my condolences to the families of those whose lives were lost in the wars of the 1990s, including those killed as a consequence of the NATO air strikes.

Hundreds of Serbian ultra-nationalists protest the visit by chanting their support for Donald Trump, as they gather near the Serbian presidency building. Protestor:

Trump is the alternative to globalisation. He will destroy old centres of power in the United States and he is a supporter of Russia.

After visiting Serbia, Biden will travel to Kosovo to encourage both countries to do more to normalize their relations. 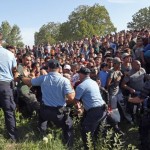 Croatia closes seven of its eight road border crossings with Serbia following a huge influx of migrants. Officials says they do not have any choice after more than 11,000 people enter the country. Roads leading to the border crossings have also been shut. A journalist at the scene has reported that migrants are walking through fields to bypass one of the border crossings. Interior Minister Ostojic:

Our country is absolutely full. Don’t come here any more. Stay in refugee centers. This is not the road to where you want to go. Buses can’t take you there. It’s a lie.

After a tense stand-off with riot police, a group of migrants try to break through the newly-sealed border barrier to try to enter Hungary. Some migrants throw missiles, including stones and water bottles at the police who then retaliate by firing tear gas and water cannon. Several people have received medical treatment from the ambulance service at the scene of the clashes. Most are suffering from the effects of tear gas but one young man had a bloody leg. Migrant:

We fled wars and violence and did not expect such brutality and inhumane treatment. 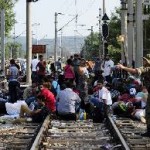 Long lines of migrants, many of them refugees from Syria, are walking through southern Serbia before jumping on trains and buses north to western Europe. 8,000 migrants have registered in the southern Serbian town of Presevo over the past 24 hours. State authorities and aid agencies are struggling to provide tents, food and water to thousands who have come since Greece began ferrying migrants from overwhelmed islands to the mainland. The problem threatens to get worse as Hungary races to complete a fence along its border with Serbia to keep the migrants out.

What's this? This is an unbiased just-the-facts news timeline ('newsline') about Serbia, created by Newslines' contributors. Help us grow it by finding and summarising news. Learn more