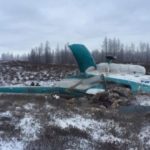 A helicopter crashes in Siberia, killing 19 of the 22 people on board. The crash was likely caused by flight protocol violations. The regional government calls for a day of mourning.

A criminal probe has been launched but investigators suspect the crash could have been caused by a violation of flight safety regulations, a mechanical problem or poor weather conditions. The helicopter was flying from an oil and gas field in the Siberian region of Krasnoyarsk to the small settlement of Urengoi.